Protect the news, keep it alive & carry it into the future — support the Sentinel today

Do you know the story of John McCain buying a stack of newspapers after coming home from five years in a POW camp? It is said that McCain was so starved for current events and the happenings of the world that he poured through weeks of newspapers with the kind of energy and hunger you’d expect a newly freed prisoner to put into devouring a steak.

We connect to the world through what we read and watch, more than through what we eat. I heard that story while growing up in Colorado and during journalism school in Missouri, but now that I’m Arizona it seems especially relevant.

What stands out to me is the idea of a stack of newspapers. I didn’t start reading newspapers until I was in college, but this is the first year during which I’ve read almost all my news online. I used to work for a newspaper in Yuma and a few others as a student in Missouri, but those days seem black and white now because I don’t think there was a single day this year where I unfolded the news before I read it.

Still, at TucsonSentinel.com, we’re deeply tied to the values and ways of the journalists who used to fill up newspaper pages. Asking for donations for our nonprofit, local, independent, online news outlet can sound like asking to help start up a futuristic venture, but it’s also asking to help regenerate a valued but venerable and somewhat endangered enterprise.

When I told people that I was going to study journalism for my undergraduate degree, in some way or another I’d hear people tell me "Good luck finding work." The Denver Post, the paper my dad got delivered to our curb, was getting skinnier each year until I graduated high school, and by the time I graduated college, the Alden Global Capital hedge fund (which is now making eyes at the media chain that owns the Daily Star) had taken it over and cut even more.

I came back home after college enthused to be a Latino journalist with insight into both the Latino community and the local community, but not a lot of outlets were hiring and when they were, I was easily outmatched by journalists with twice as much experience as I had. While I was back, I also noticed there were a lot of former Denver Post editors and publishers scattered across newer publications, most of them online.

I left Colorado for the border region of Arizona, because I knew there were many interesting, vital stories there — and I could be closer to Mexico and more Mexican-Americans. I would still be close to Colorado, and I would be able to use my Spanish. Better yet, I could do that while telling stories, and I could make myself a special kind of journalist with what I'd find.

I was lucky to find and have been found by TucsonSentinel.com, a publication that understands all that and what I was thinking. The Sentinel understands the cornerstone values of hard news — accuracy and telling the news how it is, without fear or favor — and wants to reflect as many voices as it can in Tucson, Southern Arizona and the Borderlands.

I was also intrigued to realize the story of TucsonSentinel.com sounds like the story of print and online news in Colorado. Our editor and publisher here, Dylan Smith, and our snarker-in-chief and columnist, Blake Morlock, used to work for the Tucson Citizen, which descended from the Arizona Citizen, founded in 1870, before either Arizona or Colorado were states. The Citizen was shuttered more than a decade ago by that same national chain, Gannett Inc., that still owns part of the Star, because they could profit more without paying those pesky reporters and editors.

The journalism at the Sentinel is like a torch that ignited a newsroom for over a century until a recession, corporate greed and the growth of the Internet almost snuffed it out before it could be passed on. Let’s hope for another 100 years! And, when they beam the news into our foreheads, that it's still the same honest and in-depth coverage of county government, City Council, local artists, the environment, the weather, the border, immigration, education, health and soccer.

Right now, NewsMatch is matching, dollar-for-dollar, each donation we receive, with the support of a special matching grant from the Loud Hound Partner Fund extending our fundraising potential. And the leaders of our local Community Challenge Fund are matching contributions, too. That means every dollar you give, before midnight on Dec. 31, can mean a 2-1 match and TRIPLE the journalism the Sentinel can pay for in 2022.

When you sign up to give $20/mo. to the Sentinel as a member of our Watchdog Club, NewsMatch and our Challenge Fund will turn it into $720 over the course of the year. Plus, with a just-announced bonus grant, the Google News Initiative will add another $1,000 to our year-end fundraising if we have 100 new, first-time contributors during NewsMatch. And we've got just 17 to go to meet that goal! Sign up for the Watchdog Club today and you can help us reach that finish line.

Let’s hope we continue to have journalists like Tucson native Paul Ingram, whose award-winning reporting covers the top stories from the border to Pima County and Tucson. We need more journalists like him, who have an edge into stories that no one else breaks and can see into every federal, state and local agency that operates in Tucson. Donations won’t just help train more journalists to report like Paul, but will continue to help him expand and dig into his coverage.

We also have the support of Report for America, the national program that is not only covering half of my salary to help our Inclusivity, Diversity, Equity and Access beat, but will do the same to bring in a reporter who will ramp up our Cultural Expression and Community Values coverage next year.

Newspapers used to have multiple revenue streams from ads, classifieds and subscriptions, but the Sentinel offers free news that isn’t overloaded with advertising. The priority here is high quality, accessible information that makes a smarter Tucson, which is also why we translate and publish stories in Spanish — but that all starts with our readers and supporters, not us.

The readers who donate to our work are the ones who push ahead our mission of being a source of trusted news for this historic and multicultural region. At the Sentinel, we're the ones who know how to get that job done — but we need more help.

TucsonSentinel.com is a national leader in rebuilding local news. Our work is enriched by the diversity of voices we welcome to listen and tell the stories of our community, which underscore how much we value the enduring sense of place that makes Tucson special.

Please, push us forward by donating before NewsMatch ends on Dec. 31. Your gifts will support the work by the Sentinel's senior reporter Paul Ingram, my reporting on the IDEA beat, and the new Report for America corps member who will join us in 2022, covering the ties that bind us and the dreams that drive us. Your donations also make possible the vital work of our rock-solid editors like Gene Moreland and Maria Coxon-Smith, and Dylan Smith's work uncovering stories that some people don't want you to know.

Imagine a world without news. The story of John McCain and his stack of newsprint suggests that without journalism there would be no way for us to connect with the world, beyond our immediate daily lives. But we don't need to be isolated from each other. Newspapers are not likely to last in their physical form, but that doesn't mean we have to lose the news that connects us to our community. 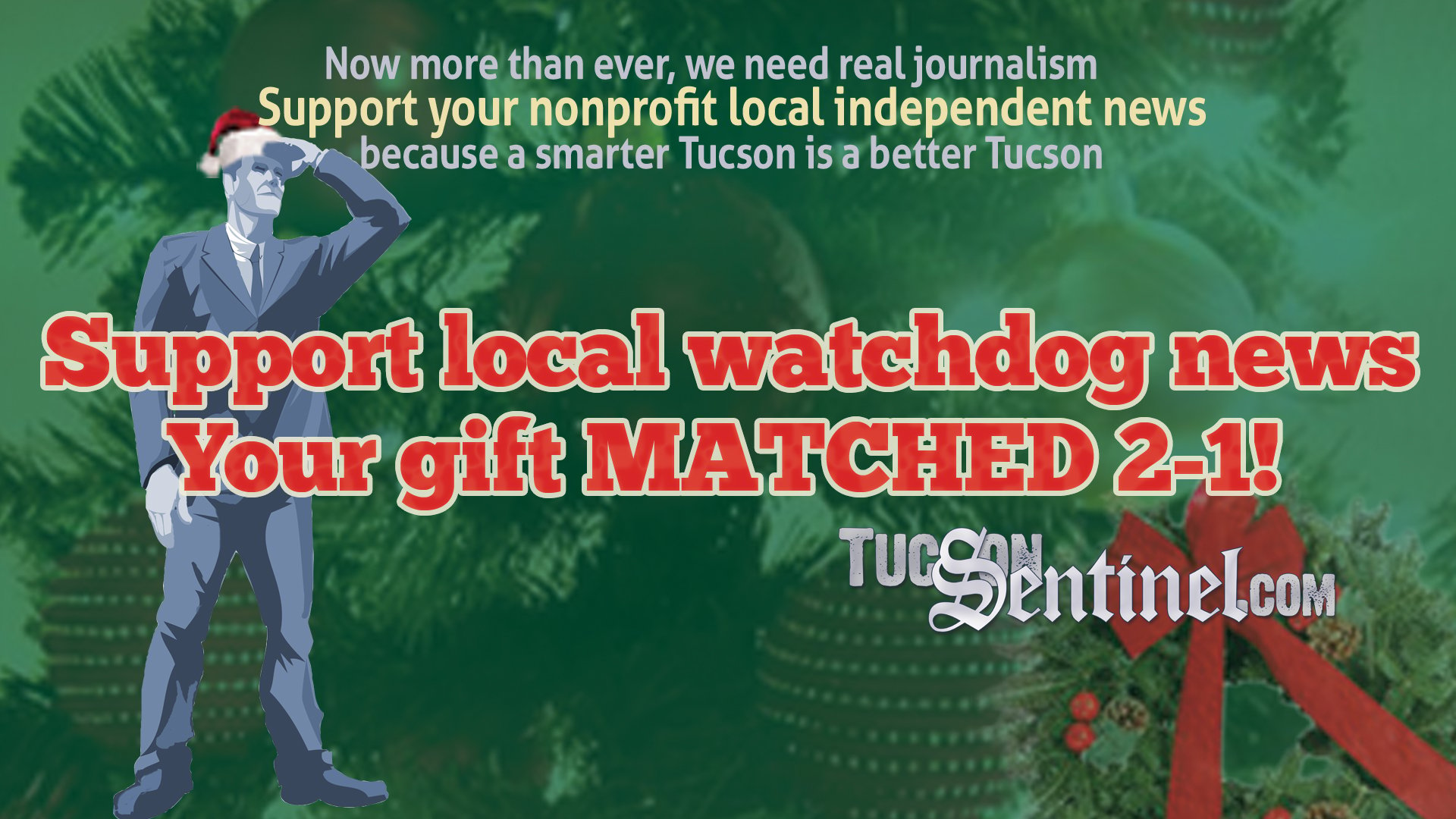 Bennito L. Kelty is TucsonSentinel.com’s IDEA reporter, focusing on Inclusion, Diversity, Equity and Access stories, and a Report for America corps member supported by readers like you.