Arguably, the United States is the greatest nation in the world. But when someone says “The U.S. health care system is the best in the world,” that person is either telling a big lie, or repeating one. During the health care debate, Republicans said it over and over. It probably ranks right behind “Business does it better” and “Government can’t do anything right” as a justification for leaving our broken health care system the way it is.

In the latest Commonwealth Fund study released just this week, the U.S. again ranks last in health care quality. It turns out our system, to put it bluntly, stinks like a wet hound. If you’ve ever really, really needed health care, you probably already know this.

The Commonwealth Fund is a nonpartisan foundation that was endowed with private money in 1918. That means, of course, that they don’t need to pander to any donor’s pro or anti reform agenda. This latest comparison of health costs and outcomes, "How the Performance of the U.S. Health Care System Compares Internationally 2010 Update," has some sobering data for anyone who’s fond of our private, employer-based system.

Of seven socioeconomic rivals, The Netherlands – which has a publicly funded, privately administered health care system – ranks first. The U.K. – a fully socialized system – ranks second, followed by Australia, Germany, New Zealand, Canada and last, the U.S. Every other country leads in some aspect of healthcare; the highest U.S. ranking in any category is fourth. 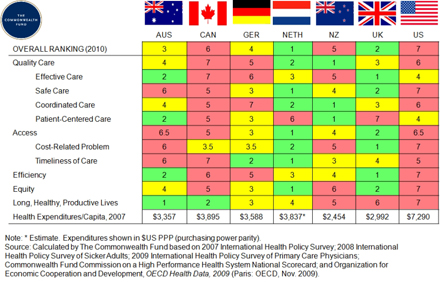 Well, that’s not entirely accurate. The U.S. is number one with a bullet in overspending.

While these other countries spend 8-10 percent of GDP on healthcare, the US spends sixteen percent. In real dollars that translates into nearly $7,500 per person versus others that averaged $3,350 per covered life. (These countries cover everyone for half of what we pay to cover not nearly all.) New Zealand spends the least per person on health care. Number two ranked U.K. is next, closely followed by Australia. Top-ranked the Netherlands spends about $3,800 U.S. dollars per person.

What do these comparisons mean to you? It means you spend twice what a Dutch person spends on his or her health care, for a dramatically inferior product. Now we can understand why Republicans said a public option would be bad, and then invested everything in preventing it. Apparently government can do better.

“So what,” you say? “It’s worth it. We live longer, healthier and happier lives,” right?” Well not exactly.

Most troubling, the U.S. fails to achieve better health outcomes than the other countries, and as shown in the earlier editions, the U.S. is last on dimensions of access, patient safety, coordination, efficiency, and equity.

The U.S. ranks last overall with poor scores on all three indicators of long, healthy, and productive lives… Overall, Australia ranks highest on healthy lives, scoring in the top three on all of the indicators.

— "How the Performance of the U.S. Health Care System Compares Internationally 2010 Update"

That’s the bad news. Some good news is that The American Recovery and Reinvestment Act – “The Stimulus” in complainer-speak – included substantial funds to help hospitals move to portable, electronic records. This improved efficiency in Australia, New Zealand and the UK. No more taking an X-ray at the ER and another one the next day at the follow-up.

Developing quality health care still looks like a long slog. But beginning in September, The Affordable Healthcare for America Act – which detractors still call “Obamacare” though they’ve quietly dropped the repeal idea – kicks in. This year, it eliminates some of the common tricks private insurers use to avoid paying claims. Gone are rescissions, lifetime limits, profit gouging, reducing benefits for retirees and kicking college kids to the curb. Rescissions, of course, are when they drop you just because you’ve gotten sick. That used to be legal.

In all, the law provides 25 new benefits in 2010 that increase availability and affordability. More changes will follow in each of the next five years. Under public scrutiny, sixty insurers have decided to end some bad acts early, like recissions.

The sum total of these changes probably won’t move us into the top half of the survey during the next few years, but maybe we won’t be dead last anymore. And maybe we’ll save a few hundred thousand lives. That would be a nice health outcome, now wouldn’t it?

Jimmy Zuma splits his time between Washington, D.C. and Tucson. He writes the online opinion journal, Smart v. Stupid. He spent 5 years in Tucson in the early ‘80s, when life was a little slower, swamp coolers were a little more plentiful, Tucson’s legendary music scene was in full bloom, and the prevailing work ethic was “don’t - unless you have to.”