What the Devil won't tell you

The Arizona Republican Party fired off a tweet, saying that the reporters who ask them questions are terrorists... or a punk band. It's hard to tell.

The GOP have for years cast themselves as the defenders of the English language. And yet they can't get six words out into cyberspace without demonstrating a need for multiple edits.

Some background: A Texas group pushing 2020 election fantasies on the Arizona Legislature got properly covered in the Phoenix political press.

So the state Republican Party tweeted out this brief temper tantrum: "THE MAINSTREAM MEDIA IS DOMESTIC TERRORISTS."

It was an attempt to troll. So I'm not snapping at the (ludicrous) substance.

However, the tweet tells me the folks in charge of the Arizona Republican Party need to learn some more about how words work and the English language functions before they tweet again.

I could forgive the tweeter's ignorance of media being plural if the tweeter in-question did not put an "S" at the end of terrorist. So it's not that the Arizona GOP tweeter didn't know the subject was plural. They just didn't care enough about mainstream Arizona values to properly use the language they want to be "official." 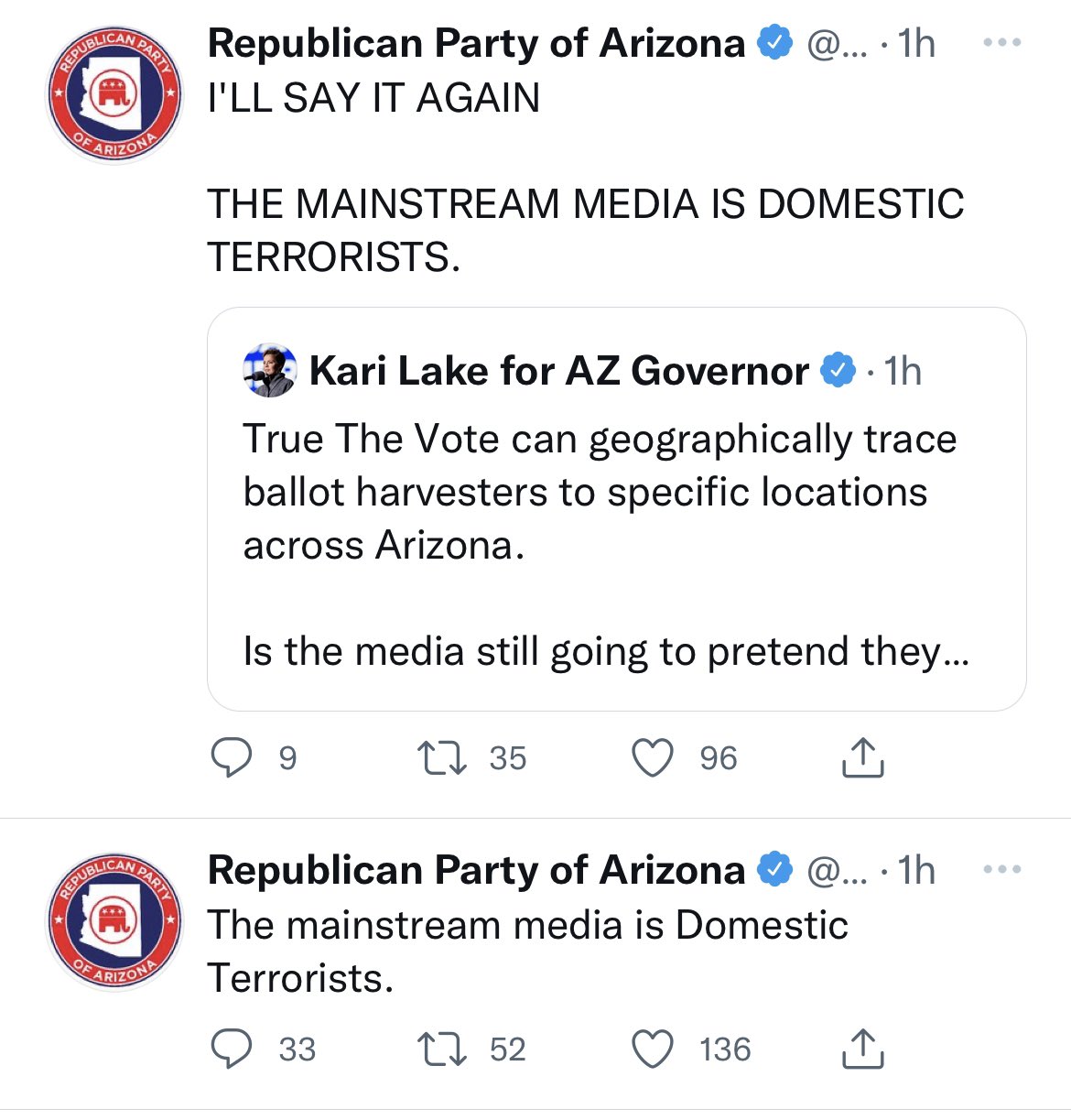 Each was different. The first read:

The mainstream media is Domestic Terrorists.

In my experience, some people capitalize random things to cover for the fact that they don't know how to capitalize. Others do it because their inner monologues are as sophisticated as a narrator reading a Winnie-the-Pooh story book.

I know. It's silly of me to suggest such a thing of the Arizona Republican Party.

THE MAINSTREAM MEDIA IS DOMESTIC TERRORISTS.

Why all caps? Seriously, why ALL CAPS?

If everything is capitalized, no one can accuse them of ignorance because all the letters are "up" (as journalists would say).

I guess they missed the part of middle-school socialist indoctrination that dealt with grammar.

Golly, I wonder why folks labeling critics as criminals would channel their inner German?

Hey, I write for a living and I can tie myself into grammatical knots or change direction in the middle of a sentence and lose agreement between the subject and predicate.

This was a six-word tweet and they sent it twice.

My columns are decidedly not six words long.

We can't link to those statements, because Arizona's Republican leadership apparently deleted the pair of tweets. But they didn't take down their retweet of a crackpot statement Tuesday by state party chair Kelli Ward about "False Information being written and disseminated by 'journalistic terrorists' like some of these" reporters at a presentation of yet more unfounded election conspiracist claims. (There's that Germanic capitalization again.)

My other point is a bit of a personal gripe that goes back some years. Don't describe your opponents as "mainstream."

Surely, we can agree terrorists aren't.

The mainstream is defined by Cambridge as "the ideas, attitudes, or activities that are regarded as normal or conventional; the dominant trend in opinion, fashion, or the arts."

Merriam-Webster, that most American of dictionaries, says it means "having, reflecting, or being compatible with the prevailing attitudes and values of a society or group."

Politicians have for decades branded the "mainstream" as the sweet spot of the American electorate. It's the central channel of American politics, flowing with maximum force and limited resistance. It's the "main stream."

The point of a proper political attack is to paint the opposition or adversary as "out of touch with the mainstream."

So by defining the media as mainstream, the Republican Party is describing it as in line with the prevailing attitudes and values of society. Standing against that — as I assume Republicans now are — is to stand against the Middle American values.

Are you calling Middle America a bunch of terrorists, Arizona GOP?

I'm guessing the tweeter-in-question did not mean to do that.

This is why Sarah Palin cleverly referred to the mainstream media as the "lamestream media." She sought to deny the media its place among typical — and identikit — Americans. Then the right wing reverted to form and just started declaring the media in tune with regular and real American values because they don't know what words mean.

So yeah, the Arizona GOP is more obtuse than Sarah Palin. But please, tell the state's English teachers what's wrong with their textbooks.

One final question: Given that Kari Lake, a leading candidate for the party's gubernatorial nomination, was once a TV news anchor, what do we call her?

There have been discussions as to whether anchors are journalists. In the UK, they are often called "news readers." Tucson has a history of anchors being true-blue newshounds (Bud Foster, Savannah Guthrie).

Anyway, I'm going to go make a true-blue cheeseburger and fries now because this columnist believes in the United States of America, dammit.

I believe the typical response to those assailing America's values who insist on remaining ignorant about the English language has been to insist they leave the effing country.

I won't do that to the Arizona GOP.

I'm not sure they can read the signs pointing them the way.

Blake Morlock is an award-winning columnist who worked in daily journalism for nearly 20 years and is the former communications director for the Pima County Democratic Party. Now he’s telling you things that the Devil won’t.