The number of students overall fell by about 1 percent, or 250,000, at the very time that policymakers are pushing to speed up the pace at which the nation is producing college graduates. 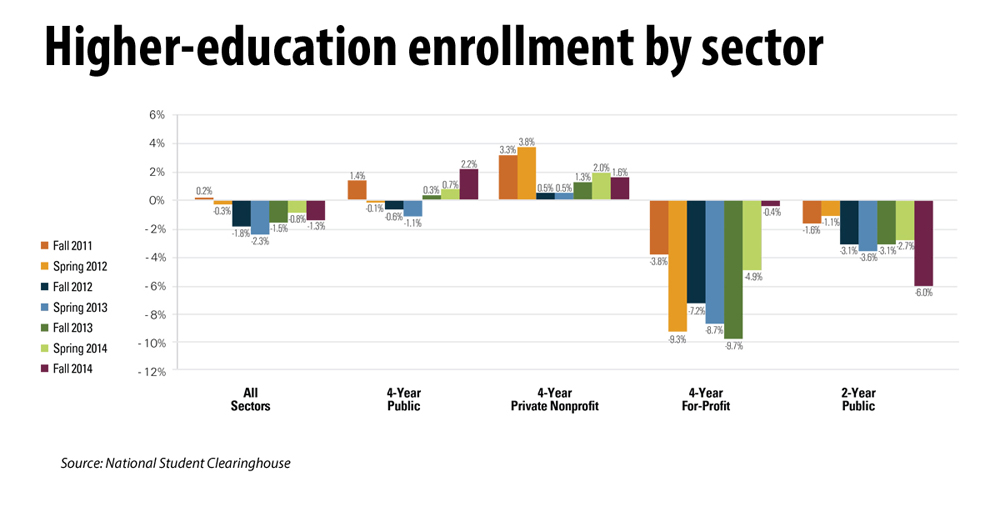 Most of the decrease is among students over 24, who researchers said were either leaving college or deciding not to enroll as the economy improves and more jobs become available. The number of students finishing high school is also down, meaning there are fewer of them bound for higher education.

There appeared to be a particularly sharp decline at community colleges, whose numbers fell by 6 percent, though part of that is because some of those colleges have added bachelor’s degree programs and their students have been reclassified into the four-year, rather than two-year, category.

When that shift is taken into account, community college enrollment fell by 3.6 percent, the Clearinghouse reports.

The number of students at four-year private, nonprofit institutions rose about 1.6 percent, though the growth was concentrated at the largest campuses.
The enrollment slide at private, for-profit colleges slowed to less than half of 1 percent, down from last year’s nearly 10 percent plunge.