An estimated $577 million, or roughly 69 percent, was spent by conservative groups, compared with $237 million spent by liberal groups, or about 28 percent, with the remainder expended by other organizations.

The spending helped close the gap on Obama's considerable fundraising advantage over Romney. As Election Day approaches, Romney and Obama are neck-and-neck in national polls.

The totals are from a joint analysis of Federal Election Commission data by the Center for Responsive Politics and the Center for Public Integrity. The Centers' analysis covers the period from Jan. 1, 2011 through Oct. 28, 2012, and does not include independent spending by the political party committees.

The final tally will be higher as spending continues to accelerate before Election Day.

Obama's campaign raised more than $632 million in the 2012 election, 62 percent more than Romney's $389 million. Even when including money raised by the Democratic and Republican National Committees, Obama still has an edge of more than $166 million: $924 million for the president's re-election team versus $758 million for Romney and the GOP.

The president's campaign committee was bankrolled to a great degree by money from grassroots supporters, while Romney relied more heavily on larger donors. Individuals who gave $200 or less accounted for 34 percent of Obama's war chest. Meanwhile, such small-dollar donors were responsible for only 18 percent of the Romney campaign's haul.

The deluge of outside spending was made possible by the 2010 Citizens United decision and a lower court ruling that allowed individuals, labor unions and corporations to give money to outside spending groups — mostly nonprofits and super PACs — to buy advertising attacking or supporting candidates.

Super PACs were generally backed by super donors. Billionaire casino magnate Sheldon Adelson and his family, for example, gave $54 million to Republican super PACs as of mid-October, far more than any other donor this election cycle.

Nonprofit "social welfare" groups and trade associations can raise just as much money, but are not required to report their donors. The lack of transparency sparked legislation to require disclosure, but it was defeated.

Nonprofits were responsible for more than $245 million, or about 30 percent, of the $840 million in total outside spending. That's about $100 million more than they spent in 2010.

During the week of Sept. 30, about $16.5 million was spent by outside groups benefiting Romney, mostly on ads attacking Obama. Three weeks later, the seven-day total jumped to more than $55 million, according to FEC filings.

The GOP candidate, facing the Obama fundraising juggernaut, needed the help of outside groups to keep pace.

The Obama campaign aired nearly three times as many ads as the Romney campaign between late April and late October, according to a recent study by the Wesleyan Media Project.

Wesleyan found that the 460,500 ads aired by the Obama campaign in the presidential election was more than the Romney campaign, the RNC and seven other Republican-aligned outside spending groups combined — including the top GOP super PACs Restore Our Future and American Crossroads and conservative nonprofits Crossroads GPS and Americans for Prosperity.

Restore Our Future alone accounted for about $1 out of every $5 of all super PAC donations received. The pro-Romney group raised more than $130 million, much of which was spent decimating Romney's rivals during the GOP primaries.

In 2010, during their first year of existence, all super PACs combined raised just $85 million.

The top 149 individual super PAC donors — each of whom has contributed at least $500,000 — are responsible for $290 million of funds raised.

And 858 individuals who contributed at least $50,000 to super PACs accounted for nearly 60 percent of all money the groups collected in the 2012 election. The median household income in 2011, by way of comparison, was $50,054, according to the U.S. Census Bureau.

Donations from large, publicly traded corporations have been relatively rare, but in the waning weeks of the campaign, oil and gas giant Chevron wrote a $2.5 million check to the Congressional Leadership Fund, a super PAC backing Republican candidates that is closely associated with House Speaker John Boehner, R-Ohio.

The emergence of super PACs has been heralded by some, such as Republican lawyer Brad Smith, the former chairman of the Federal Election Commission who co-founded the conservative Center for Competitive Politics.

"[Super PACs] have helped to level the playing field between Romney and Obama, whereas otherwise Obama's spending advantage would have been substantial," said Smith. "And in some cases they have raised issues that concern voters that the candidates have chosen to avoid."

"When elected officials rely on the most-wealthy of wealthy Americans, it means the voices of everyday people lose out," said Nick Nyhart, president of the advocacy group Public Campaign, which favors publicly financed elections.

Unlike traditional political action committees, super PACs have no contribution limits and the funds they raise can't be directly donated to candidates. Instead, the money they raise has primarily been used to fund attack ads.

Prior to Citizens United, groups that wanted to expressly advocate for or against a candidate were limited to receiving no more than $5,000 per donor per calendar year.

As important as super PACs were in the 2012 election, the loosening of political spending rules for non-disclosing, nonprofit organizations was also a key development following the Citizens United decision.

GOP-aligned nonprofits have outspent their Democratic counterparts by a ratio of more than 8 to 1.

Federal law requires spending to be reported only if a group's advertisements encourage viewers to vote for or against a candidate, or if they mention a candidate shortly before a political convention or election.

Justice Anthony Kennedy, the author of the Court's Citizens United 5-4 opinion, made a point of saying that disclosure was a key part of the court's rationale. Disclosure would allow citizens to monitor the new political activity.

"This transparency enables the electorate to make informed decisions and give proper weight to different speakers and messages," he wrote.

But the tax-exempt groups — some of which clearly exist for no other reason than to elect favored candidates — are spared by Internal Revenue Service and FEC rules from having to publicly reveal their donors.

Crossroads GPS, co-founded by GOP strategist Karl Rove, claims in press releases to have spent more than $120 million since January 2011, of which only $57 million has been reported to the FEC. At least $12 million has been spent attacking Obama, according to FEC records.

Voters watching its ads have no idea where the money is coming from. Nor do they know who is funding the work of liberal organizations doing the same thing, albeit with a lot less money.

Patriot Majority has reported spending $6.5 million on ads, more than half of which has opposed Rep. Dean Heller, the Republican who is running for U.S. Senate in Nevada.

Not all secret money is coming from nonprofits. Throughout the election season, mystery corporations have popped up, spending huge sums.

Specialty Group Inc. of Knoxville, Tenn., wrote seven checks totaling $5.2 million to pro-tea party super PAC FreedomWorks for America in early October. The corporation was created on Sept. 26. The name and address listed on incorporation records are those of a Knoxville, Tenn., area attorney. His published phone line has been disconnected.

The source of the funds, as of this writing, is unknown.

Meanwhile, more than $10 million in funds given to super PACs, which disclose donors regularly, have come from nonprofits, showing that even the groups required to be transparent about their funding sources can still shield the names of donors.

The explosion in outside spending has coarsened the political debate, flooding the airwaves in Ohio, Florida, Virginia and other battleground states with negative, often inaccurate ads.

Roughly 80 percent of all spending by both conservative groups and liberal groups has been negative, FEC records indicate.

Fully 100 percent of the nearly $57 million Priorities USA Action reported spending has been on negative ads.

The group, which coined the slogan "If Mitt Romney wins, the middle class loses," linked Romney to the death of a woman who lost her battle with cancer.

Another of the super PAC's most memorable ads featured a worker describing how building the stage on which officials announced the plant's closure, after it was bought by Bain Capital, was like building his "own coffin" and made him "sick."

Eighty-eight percent of Restore Our Future's spending went toward negative ads, as did 95 percent of American Crossroads' expenditures.

Many of these ads have criticized Obama's handling of the economy, arguing that the country "can't afford" four more years of Obama's policies. One spot features a small-business owner saying, "We can't create more jobs until Obama loses his."

Others ads have featured disillusioned Obama supporters from 2008 expressing disappointment with the president.

The winners in the post-Citizens United campaign finance regime won't be known for certain until after Election Day. But Ciara Torres-Spelliscy, an assistant professor of law at Stetson University's law school who previously worked as an attorney with the Brennan Center for Justice, said it won't be the voters.

"I fear that we have lost elections on a human scale with post-Citizens United spending by super PACs" and non-disclosing groups, she said. "The losers here are voters who get carpet bombed with political ads full of half-truths and distortions."


Reprinted by permission of The Center for Public Integrity. 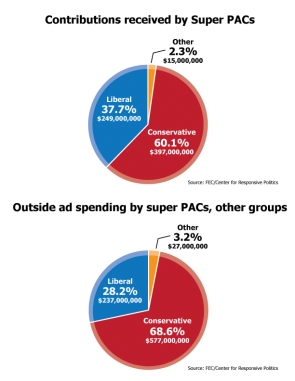