As Amber Gary dropped her children off for the first day of school she wondered what to do with them every Friday for the rest of the year, when school would close.

Her two daughters attend schools in Mineral Wells Independent School District, a rural school district west of Fort Worth with more than 3,000 students, which made the switch to a four-day instructional week this academic year.

“I have to work,” said Gary, a manager at Taco Casa, a Tex-Mex fast-food restaurant. “I’ll probably just take them to work with me while I figure something out.”

The school district is among 41 across the Lone Star state starting the new school year with one less day of instruction, up from 14 the previous year, according to news reports.

Shortening the school week is a growing trend across the country amid a national teacher shortage exacerbated by COVID-19 and battles over critical race theory. 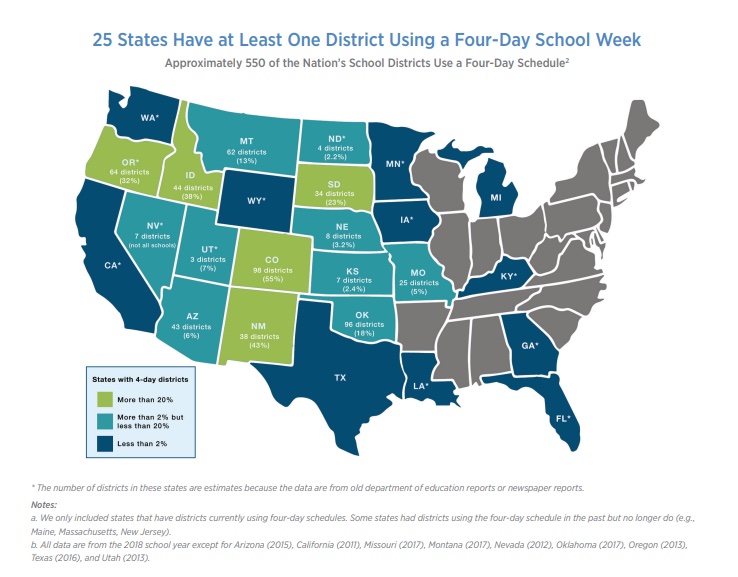 For years, four-day weeks have helped small rural schools save money and attract and retain teachers. Now larger districts are considering it, including a few in urban areas in Wisconsin, Iowa and Missouri.

“I think the decision was rushed and administrators were not really thinking about everyone it’s going to affect,” Gary said shortly after dropping off her 7-year-old daughter for her first day of second grade at Houston Elementary.

Her 9-year-old-daughter, who suffers from a genetic learning disorder, waited in the car to be dropped off at a nearby school where she would be starting fourth grade. The impact on her is Gary’s biggest concern: “She has special needs and needs a strict schedule.”

Parents expressed mixed opinions as they dropped off young students at Houston Elementary for the first day of school on Aug. 8. Some welcomed the extra day off. Others felt school officials left them out of the decision-making process and made the change too quickly.

John Kuhn, superintendent of Mineral Wells ISD, said officials made the decision to avert a crisis after neighboring districts switched.

“We were losing very good teachers, and if they were drawn to a four-day week, there was a chance students would be too,” Kuhn said. “That was our biggest fear.”

Before making the proposal to the board, Kuhn read multiple studies showing mixed results, sent a poll to parents seeking feedback and called districts across the state that had already made the change.

Athens Independent School District, which proudly brands itself online as the “Home of the 4-Day Instructional Week,” has received many inquiries from other districts. More than a dozen called shortly before the summer break to ask for advice and check how Athens was fairing, said Superintendent Janie Sims.

“My advice was to take their time,” Sims said. “There’s a lot of moving parts, and if parents, staff or other members of the community feel left out, it’s really hard to earn that trust back.”

In 2015, the Texas Legislature amended the state’s Education Code to allow districts to lengthen the school day and adopt a shorter instructional week.

The Athens school board approved a three-year pilot in 2018 as a means of attracting more mid- to senior-level teachers. Sims said the district had a healthy mix of new and experienced teachers and zero vacancies as the district began the school year on Aug. 1.

A few weeks ago, the district received its first comparable state test results since COVID and the implementation of the four-day-schedule. Sims said the scores for each school were the best the district has ever had.

“It’s not an easy process… Everyone is affected, both inside and outside the schools,” Sims said. “But the community really came together and made it work, and now for the first time we can definitively say that our plan worked.”

But that’s not always the case. Paul Hill, founder of the Center on Reinventing Public Education, a research organization at Arizona State University, called the four-day school week a “troubling contagion” spreading in rural areas without much accountability or input from those most affected.

“One thing we’ve seen over and over again is that those that are not in the gossip networks are left out of the decision-making process,” Hill said. “Unfortunately, they are also the families that depend more on schools for meals, childcare and child development, including special-needs children.”

Before 2021, most studies looking at four-day-schools were limited in scope and showed mixed results.

Then came the first large-scale research study, released by the RAND Corp., a nonpartisan research organization. The authors compared four-day and five-day schools nationwide and found the model does help attract and retain teachers. However, students on the four-day school week have lower English and math test scores, over time, than peers on a five-day schedule.

The most affected were minority, low-income and special-needs students, according to Paul Thompson, associate professor of economics at Oregon State University, who led the study.

“It really comes down to time and resources,” Thompson said. “Those students that are going to be unattended on their day off and engaging in asynchronous activities on an iPad or something like that, they are the most affected.”

Children without supervision on the off day may also be exposed to more risky behaviors. A 2016 study in Colorado found that juvenile crime jumped by almost 20% when schools switched to four-day weeks.

“My biggest worry is that my child’s grades will drop because the only thing they’re going to be doing on Friday when they’re home is play video games and watch TV,” said Lety Ortiz of Mineral Wells. She has three sons, ages 17, 13 and 8, enrolled in public school.

On Aug. 12, the first day schools closed here, Ortiz’s youngest sat at a table in the back of the Mi Fiesta restaurant playing on a tablet as she waited tables.

Ortiz and her husband voted in favor of the four-day school week when administrators sent out a poll via email in mid-May. She said the district made it seem like that was the only option to retain teachers.

“They truly have good teachers, and it would be a shame to lose them to other schools that voted yes,” Ortiz said. “We didn’t really have much time to think about it.”

Reprinted by permission of The Center for Public Integrity.