Hundreds of migrants at U.S. Border Patrol detention facilities in El Paso last fall were held in custody beyond the three-day limit – and for more than a month in some cases, according to a report by the Office of the Inspector General.

Released on Aug. 9, the report comes after unannounced inspections were conducted at five Border Patrol facilities and two Office of Field Operations ports of entry in the El Paso sector on Oct. 26-28, 2021. The Congress-mandated inspections are based on U.S. Customs and Border Protection’s Transport, Escort, Detention and Search standards, which govern the agency’s interaction with detained individuals.

A Border Patrol spokesman in the El Paso sector deferred questions to the responses included in the report.

In its response, Border Patrol officials told the inspector general that the agency had to hold migrants beyond the allowed time because U.S. Immigration and Customs Enforcement was at capacity at its long-term detention facilities and couldn’t take the detainees.

Other times, flights scheduled to take some migrants back to their home countries were canceled, prolonging their detention, Border Patrol and ICE Enforcement and Removal Operations officials responded. 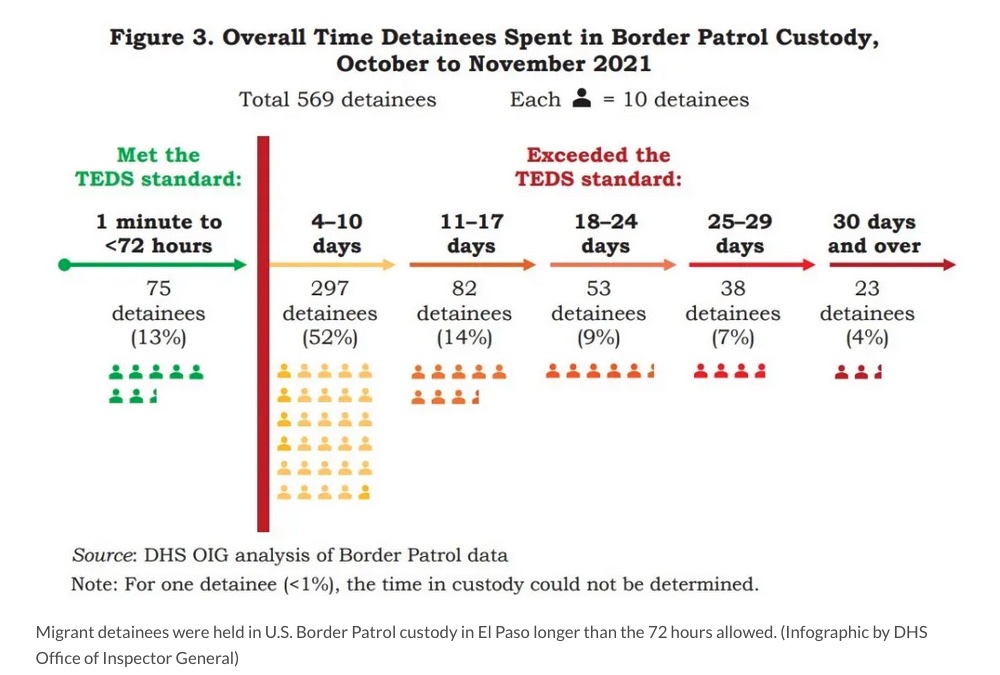 The report said Border Patrol eventually processed 556 of the detained and issued them notices to appear at future immigration court hearings. The migrants were then transferred to the removal operations office, which decides whether to detain the migrants or release them into the U.S. while they await their hearing.

Not all of the migrants were detained in El Paso the entire time, as CBP transported some to Yuma, the Rio Grande Valley or the Big Bend area to prevent overcrowding.

However, the three-day limit applies to total custody regardless of whether the migrants were transferred to detention facilities in other cities.

None of the inspected facilities were overcrowded, however, even as Border Patrol saw an increase of migrant encounters – apprehensions and expulsions – at the Southwest border. In October 2021, nearly 14,000 encounters were reported in the El Paso Sector – an increase of 60% over the same time the previous year, CBP statistics show. Some migrants make multiple attempts to cross the border.

Dylan Corbett, executive director of the Hope Border Institute, a local nonprofit focused on immigration research and policy, said the inspector general’s reports are important to promote accountability within the system and to ensure humane protocols are in place. But he’s not often surprised by their findings.

“There have been systematic issues with the detention of migrants for years so these problems are not new,” Corbett said. “It comes down to the fact that we’ve elected a system of deterrence and dissuasion that’s obviously not working.”

The Border Patrol and the Office of Field Operations met standards when it came to providing access to medical care, showers, clothing, blankets and mats, and food and snacks, the report states. Contracted medical staff provided appropriate screening and services for injuries, illnesses and mental health symptoms, and followed special procedures for pregnant women and other at-risk detainees.

Other findings by the inspector general:

The inspector general made several recommendations for Border Patrol to improve some of the migrant processing and holding policies to ensure standards are met. The outlined issues are considered unresolved until Border Patrol satisfactorily responds to them.

Prior to that, the inspector general in May 2019 – at the height of the migrant surge – issued a management alert citing overcrowding at El Paso area CBP holding facilities. Among other issues, the inspection found that up to 900 migrants were being held at the El Paso Del Norte Processing Center – which had a capacity of 125.

DHS built a 500-person soft-sided tent at the El Paso Station and later opened the Central Processing Center in the Northeast.

Monthly migrant encounters at the Southwest border reached a 21-year high in July 2021, and have continued to climb.

So far this fiscal year, from October to July, the El Paso sector has recorded nearly 229,000 migrant encounters – an increase of 47% over the same time period the prior fiscal year, CBP statistics released this week show. In July alone, the region saw 24,900 encounters – up 21% over last year.

Overall, however, the Southwest border saw a dip in encounters for the second month in a row – down 9.5% in July over last year.

This report was originally published on El Paso Matters.