Jeb Bush claimed that the science is unclear as to how much humans contribute to global warming. The United Nations climate change research organization, however, has deemed it “extremely likely” that more than half of the observed temperature increase since 1950 is due to human activities.

This suggests that the relative contributions to global warming from humans and from natural causes are unknown. Though absolute certainty on this issue is impossible, much research has gone into the question, and relatively good answers are indeed available from the U.N.’s Intergovernmental Panel on Climate Change’s fifth assessment report that was released in 2013.

IPCC, 2013: It is extremely likely that human activities caused more than half of the observed increase in GMST [global mean surface temperature] from 1951 to 2010. This assessment is supported by robust evidence from multiple studies using different methods.

“Extremely likely” means that the likelihood of an outcome is between 95 percent and 100 percent certain. The IPCC added that it is “virtually certain” — which means 99 percent to 100 percent probability — “that internal variability alone cannot account for the observed global warming since 1951.” In the IPCC’s Summary for Policymakers, the authors summarize clearly: “The best estimate of the human-induced contribution to warming is similar to the observed warming over this period.” In other words, the best guess is that humans have caused essentially all of the warming that has occurred.

The fifth assessment report goes into more detail on specific amounts of warming. Over that 1951 to 2010 period, there was a total rise in temperature of 0.6 degrees Celsius, or about one degree Fahrenheit. Human-caused emissions of greenhouse gases such as carbon dioxide “likely” (66 percent to 100 percent probability) caused between 0.5 and 1.3 degrees C of warming in total. Other human activities such as the release of aerosols have had more of a cooling effect, because they scatter and block sunlight as it reaches the atmosphere; this effect totaled between -0.6 and 0.1 degrees C.

Here’s a visual version of these numbers, from the IPCC’s report. 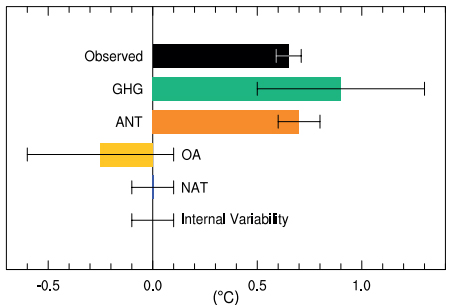 The top bar represents the observed warming since 1951 — how much hotter it has actually become, according to the planet’s numerous weather stations. Below that in green is the warming due to greenhouse gas emissions; the yellow bar represents other anthropogenic — human-caused — activities like aerosol emissions, and the orange bar combines those two human sources. At the bottom are the relatively small contributions from natural sources like the sun and volcanos, and internal variability.

To be clear, all these results have uncertainty associated with them — that’s what the lines with brackets on each bar represent. But even with that uncertainty, the human contribution to warming clearly is far larger than that of natural sources.

How do scientists attribute warming to one source over another? One method is to compare what has happened to what scientists expect would happen under certain circumstances. To do this, scientists use computer models: They simulate what would happen without human activity like burning fossil fuels, then add in that activity, and see how the simulation results differ. If the actual, observable trends — that 0.6 degrees C rise in temperature, in this case — mirror what happens in the model with human activity but not without it, then that means human activity is likely responsible for the trend.

Here’s how the IPCC describes this idea:

IPCC, 2013: If observed changes are consistent with simulations that include human influence, and inconsistent with those that do not, this would be sufficient for attribution. …

Here is a visual representation (see page 875) of what the models say would happen with and without human activities compared with the observed temperature trend. (This is a simplified, or “idealized,” version of reality for visualization purposes, according to the IPCC, but more complete studies have used this method to arrive at the results mentioned above.) 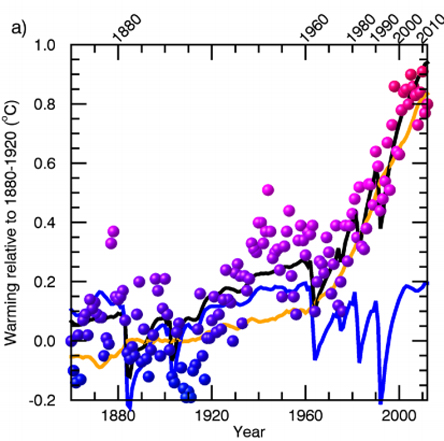 The blue line represents what multiple climate models say would have happened over more than 100 years with only natural variability — basically, only a small change in temperature would have been expected. The orange line is the same models’ guess at how the climate would react to human activities like burning fossil fuels. And all those dots, and the black line fitted to them, are what actually happened. The close link between the observed trend and the models’ guess suggests that human activity is indeed causing the planet to warm up.

This sort of analysis has been repeated and confirmed in several published studies, which the IPCC used in its synthesis of the evidence. For example, a study by National Oceanic and Atmospheric Administration scientists published in the Journal of Climate in 2013 found there were “detectable anthropogenic warming components” over most of the surface of the world for temperatures between 1901 and 2010, and in most cases the amount of warming was consistent with the models as well.

Another 2013 paper published in the journal Climate Dynamics used a different type of analysis and found that “the expected warming due to all human influences since 1950 (including aerosol effects) is very similar to the observed warming.” Yet one more, from 2011 in Nature Geoscience, found very similar results — human emissions caused 0.85 degrees C of warming, half of which was offset by aerosol emissions. This paper as well concluded that “human-induced causes dominate the observed warming.”

Other studies, included in the IPCC analysis, have found that human influence is likely the major contributor to warming over every specific part of the world with the exception of Antarctica. There are a number of other lines of evidence as well, regarding the global water cycle, the warming of the oceans and other pieces of the climate puzzle. In all, the totality of this evidence led the IPCC to make a firm conclusion:

IPCC, 2013: Taken together, the combined evidence increases the level of confidence in the attribution of observed climate change, and reduces the uncertainties associated with assessment based on a single climate variable. From this combined evidence it is virtually certain that human influence has warmed the global climate system.

Again, “virtually certain” means between 99 percent and 100 percent probability. Bush is correct if he means that researchers are unlikely to ever have an exact number for how many degrees are caused by humans — scientific calculations always have a certain amount of uncertainty. But that doesn’t mean that nothing at all is known on the topic. In this case, the science says that