The Centers for Disease Control and Prevention say the increase in autism "diagnosis is likely due to a combination of these factors," and research suggests that a large portion, if not the majority of the reported increase, is not due to an actual increase.

Individuals with autism, or autism spectrum disorder, may have difficulties with social interaction and communication and "highly focused interests and/or repetitive activities," the CDC explains. The term "spectrum" in ASD means that each person can have a different set of symptoms, which can range from mild to severe.

Trump made his claim on Feb. 14 at a meeting with Education Secretary Betsy DeVos and parents and teachers from across the U.S. He first asked a principal of a Virginia special education center if she's "seen a big increase in the autism with the children."

Trump, Feb. 14: Have you seen a big increase in the autism with the children? Big…

Principal: Yes, yes. In fact, our school has shifted its population — so more children with autism, definitely.

Trump: So what's going on with autism? When you look at the tremendous increase, it's really, it's such an incredible — it's really a horrible thing to watch, the tremendous amount of increase. Do you have any idea? And you're seeing it in the school?

Though he made no mention of vaccines during his conversation with the principal, Trump has a history of falsely linking vaccines and autism.

For example, during a Sept. 2015 GOP debate, Trump said, "Autism has become an epidemic. Twenty five years ago, 35 years ago, you look at the statistics, not even close," adding, "I'm in favor of vaccines. Do them over a longer period of time, same amount, but just in little sections, and … I think you're going to see a big impact on autism."

However, the CDC states that many studies "continue to show that vaccines are not associated with ASD."

We won't get into why there's no evidence to support a link between ASD and vaccines (we've written about that before). But we will outline why it's difficult for scientists to dissect the different potential causes for the rise in diagnoses of ASD.

No blood test or brain scan exists to diagnosis ASD because researchers have so far failed to find a neurobiological, genetic or environmental phenomenon shared by all or even most cases of the disorder. This makes it difficult to definitively diagnosis ASD.

Instead, doctors follow criteria for diagnosing ASD laid out by the American Psychiatric Association's Diagnostic and Statistical Manual and the World Health Organization's International Classification of Diseases.

Both sets of guidelines for ASD diagnosis describe a wide array of symptoms related to social and communication development, such as getting upset with small changes in routine, repeating words over and over and taking longer to develop speech and language skills.

Diagnosing ASD in children involves "some degree of subjective interpretation," Helen Leonard, an expert in childhood disability at the University of Western Australia, and others wrote in a February 2010 review paper, "Unpacking the complex nature of the autism epidemic."

In other words, one doctor may diagnosis a child with ASD while another may not.

Criteria for diagnosing ASD have also changed over time, which has "evoked debate" over the effects of these changes on the reported prevalence of ASD, Leonard and her colleagues note in their paper published in the journal Research in Autism Spectrum Disorders.

For example, since 1980, the American Psychiatric Association has changed the age at which doctors can diagnose ASD from 30 months old, to any time during infancy and childhood, to three years old and back to no specific age in the most recent version of its manual published in 2013.

Overall, the diagnostic criteria for ASD has broadened over the years.

With this broadening, studies have shown that changes to criteria may have resulted in increases in the prevalence of reported cases of autistic disorder, which is a sub-disorder of ASD, along with Asberger's syndrome and "pervasive developmental disorder not otherwise specified."

In 2007, Ashley Wazana, an expert in childhood psychiatry now at McGill University in Canada, and others found that a broadening of diagnostic criteria could have produced increases in the prevalence of autistic disorder by 1.4- to 1.6-fold.

Published in the Journal of the American Academy of Child & Adolescent Psychiatry, the study also notes that changes to the diagnostic criteria could have had an even greater impact on ASD because ASD encompasses more than just autistic disorder.

Judith S. Miller, a psychologist at the Center for Autism Research at Children's Hospital of Philadelphia, and others also reexamined data on Utah children evaluated for ASD in the 1980s in a study published in the Journal of Autism and Developmental Disorders in June 2012.

Similar to Wazana and his group, Miller and her co-authors found that 59 percent of the children who were originally not diagnosed with ASD would have been diagnosed with the disorder under 2012 criteria.

But other factors in addition to changing criteria may also be contributing to the increase in reported cases of ASD.

Like the CDC, Leonard and her co-authors point to better efforts in diagnosing ASD as a potential contributor to the increase in reported cases in their 2010 review.

In other words, there might have been just as many children who exhibited ASD symptoms in the past, but with greater awareness and understanding of the disorder among doctors and the general public, more children may be diagnosed with the disorder today than were previously.

David S. Mandell, an expert in children's psychiatric epidemiology at the University of Pennsylvania, and a colleague, showed that the more education-related spending a given state has, the higher prevalence of ASD. The authors reason that more education-related spending "may be associated with better-trained educational staff who can recognize [ASD], and more and better trained in-school specialists who can provide screening."

These differences between states should be factored into prevalence estimates, the authors conclude in their March 2005 study published in the journal the Archives of Pediatrics and Adolescent Medicine.

Intellectual disability disorder, or mental retardation, shares a number of symptoms with ASD. These individuals also "might have a hard time letting others know their wants and needs," says the CDC. Also like ASD, it "could take longer for a child with intellectual disability to learn to speak, walk, dress, or eat without help," the CDC adds.

There's evidence to support Leonard and her group's theory.

Santhosh Girirajan, a geneticist specializing in neurodevelopmental disorders, and other researchers at Penn State University analyzed special education enrollment data between 2000 and 2010 for U.S. children aged 3 to 18 years in a July 2015 study published in the American Journal of Medical Genetics.

The researchers found "no change in the overall proportion of children enrolled in the special education cohort from 2000 to 2010," which suggests that "any perceived increase in prevalence" of ASD is, at least in part, due to substituting one primary diagnosis for another.

Secondly, over the 11 year period, the group found that a decrease in the prevalence of children diagnosed with intellectual disability accounted for nearly two-thirds of the increase in children with ASD who received special educational services. 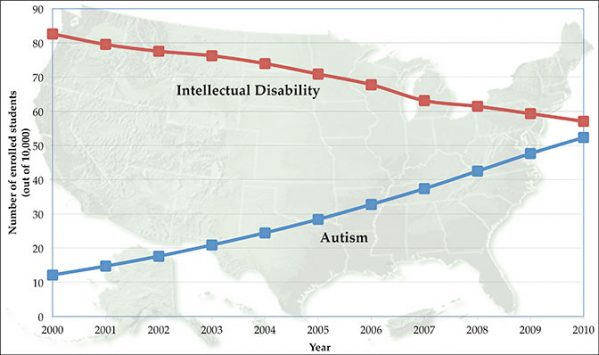 The researchers also found connections between increases in ASD prevalence and decreases in learning disorder prevalence, which suggests other disorders also similar to ASD may be contributing to an increase in ASD cases via what they called "diagnostic recategorization."

Any Room Left for a Real Increase?

But is there any room left for an actual increase in the prevalence of ASD?

Potentially. For example, researchers have also found associations between both the mother's and father's age and risk for ASD — that is, the older the parents, the greater the chance of having a child with ASD. And women in the U.S. are having children later today compared to 2000, according to the CDC. However, we couldn't find similar data on U.S. men. We also couldn't find a study that quantified how much increasing parental ages could be contributing to increased prevalence of ASD in the U.S.

If Trump had said that there has been a "tremendous" increase in the number of reported cases of ASD, that would be true.

But it's unclear, at best, that there's been a "tremendous" increase in the actual number of children who exhibit ASD's symptoms.

Research suggests that broadened diagnostic criteria, greater awareness and diagnostic recategorization of ASD with similar disorders may account for a portion, if not the majority, of this reported increase.

Currently, the CDC says the "increase in ASD diagnosis is likely due to a combination" of the these factors and an actual increase.

What is clear, however, is that there is no evidence to support any contribution by vaccines to the increase in reported prevalence of ASD, as Trump implied back in 2015.

Editor’s note: SciCheck is made possible by a grant from the Stanton Foundation.