Q: Will people living in the U.S. illegally receive “amnesty bonuses” because of President Obama’s executive actions on immigration?


A: There is no automatic payment, but some working immigrants could claim up to four years of earned income tax credits if they meet eligibility requirements.

Is it true that illegal immigrants who sign up and who have paid no income taxes will get back $24,000 though they have not paid any income taxes?

Is it true that illegal immigrants who receive amnesty and a Social Security number would receive Earned Income Tax Credits for the previous three years without paying taxes for those years?

No, the administration isn’t giving automatic payments to all immigrants who may be affected by executive actions the president announced in November.

However, it’s possible that some of those who have been working while living in the U.S. illegally — even if they paid no income tax — could receive several thousands of dollars in tax credits from the IRS if they file tax returns.

But Republican Rep. Paul Gosar went way too far at a town hall meeting in Arizona on Feb. 9 when he claimed “each illegal alien will get $24,000 in compensation.”

That amount is the maximum in tax credits that a family with three or more children could receive if they filed a tax return this year and amended tax returns for work done in past years.

What is this all about?

Obama’s immigration actions would allow parents illegally residing in the U.S. for at least five years, and who also have children who are citizens or legal permanent residents, to remain in the country for up to three years without the threat of deportation, if they register and pass a background check. If they meet the requirements, they would also be given work authorization for the three-year period and would be able to get a Social Security number.

With that Social Security number, they would be able to file new tax returns, or amend old ones, and possibly claim the earned income tax credit that helps low-income workers.

IRS Commissioner John Koskinen confirmed that fact during a hearing before the House Oversight and Government Reform Committee on Feb. 11.

Koskinen: To apply — be able to apply for it, you have to have a Social Security number.

Koskinen: So if you either are — we have about 700,000 [Individual Taxpayer Identification Numbers] out there by the illegal immigrants who are paying taxes …

Koskinen: … but they’re not eligible to apply because they don’t have a Social Security number.

Mulvaney: But several million of them will get Social Security numbers under the new program, right?

Koskinen: And under the new program, if you get a Social Security number and you work, you’ll be eligible to apply for the earned income tax credit. You will get them — an amount depending on your situation.

Koskinen told Mulvaney and other committee members that “if you get a Social Security number, you can then file for this year if you’re working, and if you earned income in the three years before that and filed, you’ll be eligible.”

Those living in the country illegally and working can file tax returns using Individual Taxpayer Identification Numbers, but those ITINs can’t be used to claim the earned income tax credit. So, those who filed with an ITIN would have to submit amended returns to receive any credits.

But Koskinen also said that even those who had not filed tax returns in the past could attempt to claim the credits for work done up to three years ago.

That last point about non-filers was a clarification from an earlier Senate Finance Committee hearing on Feb. 3, in which Koskinen mistakenly told committee members that only those immigrants who had previously filed returns would be eligible to claim the credits retroactively.

We should note that the EITC is a refundable tax credit. That is, if the credit is greater than a worker’s tax liability, the IRS will refund the difference. The IRS will even refund the amount of the credit if the worker — whether a citizen or immigrant who qualifies for the reprieve from deportation — paid no income tax.

So how much could those successfully claiming the credits receive?

Gosar, an Arizona congressman, said “it was learned that the household income deferred tax credit applies retroactively three years. So each illegal alien will get $24,000 in compensation.” That’s not accurate at all.

As we said, there is no automatic payment for anyone. Even those who apply for the tax credits are not guaranteed to get anything, let alone the highest amount possible.

Some have correctly noted that for those with large families — having at least three qualifying children — the tax credits could amount to as much as $24,000 over four years. But that’s only if the immigrants qualified for the maximum credit of about $6,000 each year and owed little to no income tax on their earnings.

Those eligible for the EITC could receive a lot less depending on their income, marital status and family size. The income limits and credit ranges for 2014 are as follows: 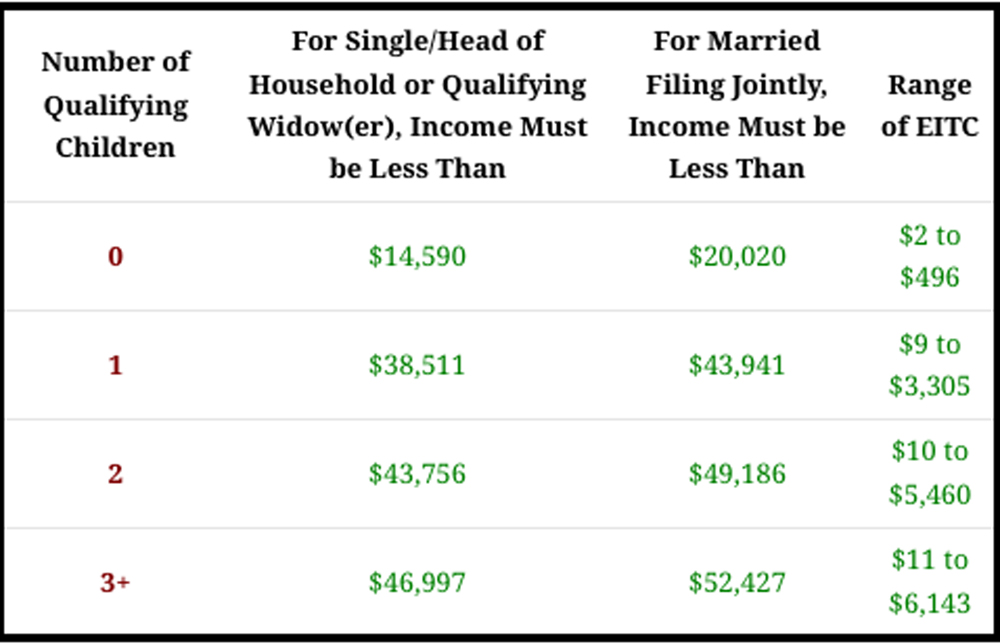 According to IRS statistics, nearly 28 million people received the EITC in 2013, totaling more than $66 billion. The average credit that year was $2,407.

The Pew Research Center estimates that Obama’s planned actions on deferred deportation would affect about 4 million immigrants, most of whom — 3.5 million — are parents whose children have legal status. But Pew didn’t say, and Koskinen said the IRS doesn’t know, how many immigrants may receive the tax credits or how much it could cost the government.

And now, it’s at least possible that immigrants who were set to apply to Obama’s expanded deferred action program won’t get anything.

The White House has said that the Justice Department will appeal the decision.