Biden and the future of Trump’s border wall

Eight 30-foot-tall border wall prototypes took shape in a remote corner of the San Diego community of Otay Mesa during President Donald Trump’s first year on the job — a campaign promise come to life which dwarfed the previous iteration of the wall. But those prototypes, since demolished, may foreshadow what’s to come for the rest of Trump’s border wall under the incoming Biden administration.

Legal and border experts say while they not only expect Biden will fulfill his own campaign promise “there will be not another foot of wall constructed,” the incoming administration and Congress will likely make changes to ensure any potential future construction cannot supersede environmental laws aimed at protecting species for whom the border wall impedes their survival.

“There’s this mad rush — there’s no other way to explain it — to get as much done as possible before Jan. 20 on the part of contractors, Homeland Security and the Trump administration for construction of the wall,” Grijalva said in a phone interview.

“It’s creating more adverse situations for people and other life forms, water and the border itself. It’s concerning to me because it’s a dangerous political response that is happening in south Texas and Arizona.”

Grijalva said he expects Biden will keep his pledge not to build another foot of border wall. But he said the “big question” for the incoming administration is how to remediate the damage done to natural resources and Native American cultural sites.

“Some of the money being hastily wasted on construction should be used on remediation,” Grijalva said, adding: “It’s not just a question of stopping the wall; it’s correcting the damage that has been done.”

To correct that damage, Grijalva said he will work with Congress “to get rid of those waivers” under the REAL ID Act of 2005 which were used by the Trump administration to circumvent environmental laws to erect the border wall as quickly as possible.

The waivers were challenged in multiple lawsuits brought by conservationists, the American Civil Liberties Union, California and other advocates, but they were largely unsuccessful in blocking border wall construction.

Beyond revoking the waivers utilized to grant blanket exemptions of critical environmental laws to speed up construction of the border wall, Grijalva said there needs to be an audit of the construction contracts handed out as well as “real transparency and oversight of Homeland Security.”

“One of things I would do administratively is audit expenditures, contracts, changes and how this money was used by companies handpicked by Trump to do the job. I think a public audit is critical because it will also tell a story,” Grijalva said.

Austin Evers, executive director of nonprofit ethics watchdog group and Freedom of Information Act litigator American Oversight, said his organization found in its “Audit the Wall” investigation much of the construction wall that had been cast as part of efforts to build a contiguous border wall actually only replaced existing fencing.

He said prior administrations made decisions to build border infrastructure barriers on a sector-by-sector basis “and few of them called for portions of wall to be built.”

“I expect the Biden administration to return to a facts and law-based approach to border policy. The question was never whether to secure the border, but the right way to do it was never on Twitter — it was based on sector-by-sector analyses and considering tribal and environmental risks and costs,” Evers said in an interview.

Portions of the wall built under the Trump administration could be torn down, Evers said, especially due to maintenance costs which could outweigh the benefits of a wall that does not stop immigrants or drugs from crossing the border.

“Walls require maintenance and if there is construction that is wasteful and requires continued spending of American taxpayer money, it should be removed,” Evers said.

An email request to Biden’s transition team seeking information on his plans for the border wall was not returned by press time. 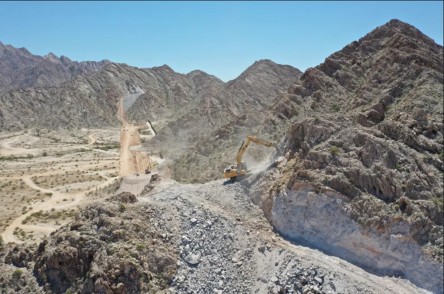 Heavy construction equipment clears a path for the U.S.-Mexico border wall through the Tinajas Atlas Mountains at the edge of the Cabeza Prieta National Wildlife Refuge in Arizona. (Photo courtesy Russ McSpadden / Center for Biological Diversity)

For Native American tribes whose ancestral lands were bisected by the U.S.-Mexico border, the focus has turned away from preventing irreparable damage to cultural, historical and burial sites by construction to discovering what damage has been done and what kind of reparations can mitigate them.

A federal judge, backed by the Ninth Circuit, found the tribe was not entitled to a preliminary injunction of ramped-up border wall construction in the Otay Mesa this fall, even though tribe members and archaeologists said human remains were believed buried in the project area.

The tribe had asked for Border Patrol agents to use cadaver dogs to detect any human remains along the length of the border but the government declined, LaPena said.

“They didn’t want to use cadaver dogs because they didn’t want to find it, they wanted to move forward as quickly as possible,” LaPena said, noting construction crews began working through the night once the tribe filed its lawsuit in August.

LaPena said since the Ninth Circuit denied the tribe’s bid to stop construction earlier this month, a cremation site was discovered as was a large prayer circle feature filled with quartz crystal.

Construction has been paused at the cremation site in El Centro, but construction has continued tearing through the prayer circle, which LePena said could been seen on Google Earth.

While the Biden administration will inherit the La Posta tribe’s legal challenge — along with dozens of pending border wall challenges — LaPena said the tribe is hopeful to begin settlement negotiations with the new administration.

“Regardless of the litigation, the impacts to tribal cultural resources along the border wall infrastructure have occurred. The impacts have happened, such as with the prayer circle, and now the question is how do we mitigate that?” LaPena said.

“I would hope with the new administration we could use the settlement process to begin a meaningful conversation about the future. Litigation will not resolve all these issues.”

“There’s no reason these cultural sites can’t be treated in the same way. The idea would be to avoid further harm and have a program in place to ensure the harm doesn’t occur again. To me, that seems to be common sense,” LaPena said.

Laiken Jordahl, a borderlands campaigner for the Center for Biological Diversity, has personally documented ramped-up border wall construction in Arizona this year.

He said the former 3-foot vehicle barriers in the Arizona desert have since been replaced with 30-foot-tall steel bollard walls which provide no gaps for migrating wildlife to pass through.

The environmental group has sued the Trump administration half a dozen times over its environmental law waivers to prevent damage to wildlife, Jordahl said.

“At the core of the issue is people and wildlife at the borderlands are not receiving the same protections as other people across the country and that is fundamentally unjust,” Jordahl said.

“The government has no authority to waive laws anywhere else. It’s tragic communities at the border are not protected by the Clean Water Act, Safe Drinking Act, and Native American Graves Protection and Repatriation Act, which have been brushed aside to make way for Trump’s despicable pet project,” Jordahl said.

While the long-term effects of the wall cutting through migratory paths are not yet fully known, Jordahl said pictures of mule deer “dead in the shadow of the border wall” suggest there has already been negative impacts on animal migration.

“At the very least we will need to take sections down in important migratory corridors for wildlife,” Jordahl said, adding, “Once we do consult with scientists and work with wildlife biologists on both sides of the border, that will help us assess just how much of the wall needs to come down.” 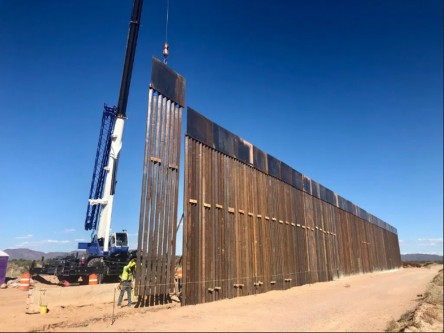 Yet some border infrastructure has been sorely needed for some time: The ports of entry are relics that are showing their age — and inefficiency.

Everard Meade, director of the University of San Diego’s Trans-Border Institute, agreed the Biden administration will first be tasked with remediating environmental and cultural site damages caused by border wall construction. But Biden’s approach to border security will likely build on the Obama administration’s historic investment in modernizing the San Ysidro Port Entry in a bid to broker some bipartisan deals in the House and Senate.

“There’s not a lot of bipartisan issues around the U.S.-Mexico border, but one where there ought to be is modernizing ports of entry,” Meade said.

He pointed the broad coalition of support in San Diego when it comes to modernizing port of entry infrastructure to more efficiently and safely move goods and people traveling for work, school and shopping between the U.S. and Mexico.

And he touted the historic public-private partnership which facilitated the opening of the U.S.-Mexico pedestrian airport crossing and San Diego’s involvement in the brokering of the US-Mexico-Canada Agreement as successes that “have nothing to do with the border wall.”

“I tend to think what Biden will do instead of focusing on building new borders in wilderness areas will be to invest in ports of entry,” Meade said. “The port of entry is a good story, it’s something that Biden wants. He said he wants practical people with governing experience, who can work across the aisle.”