The impact of missed preventative medical care during the pandemic is beginning to emerge in the form of drastic declines in childhood vaccination rates among Arizona youth, now at lower levels than at any point in the past decade.

The plummeting rates follow a years-long decline in immunizations among Arizona students overall—one that has put residents of all ages at heightened risk of infection from largely preventable communicable diseases.

The trend is compounded, experts contend, by a reluctance from the Arizona Department of Health Services to address rising rates of personal belief vaccine exemptions. The Arizona Legislature, meanwhile, passed a law to limit the ability of health regulators to require certain vaccines for school attendance.

Out of nearly 1,000 Arizona schools with kindergarten classes, about 60% had decreases in students considered immune from measles, mumps and rubella between 2018 and 2021, according to an AZCIR analysis of school vaccination data. Immunization rates in schools dropped by as much as 30 percentage points for certain vaccines, and more than half of kindergarten classes examined had lower DTaP vaccination rates in 2021 than they did in 2018.

Hundreds of Arizona schools also didn’t maintain a full accounting of which students are compliant, according to data from the 2021-2022 school year, meaning not every student has an immunization record or exemption on file, AZCIR found. Around 40% of kindergarten classes also lack the student paperwork for MMR or DTaP vaccinations.

Wide-ranging vaccination rates across the state mean similar variation exists in levels of protection from diseases such as whooping cough, chickenpox and polio. For highly contagious diseases like measles, at least 95% of a population needs to be vaccinated to stop an outbreak—a threshold just three in 10 Arizona kindergarten classrooms currently meet or surpass. This means more than 7,000 kindergarten students in Arizona could now be at risk of contracting measles in an outbreak.

Three measles cases were reported in September by the Maricopa County Department of Public Health, two of which were diagnosed in children. The total Arizona cases have since risen to five.

“The only reason we don't have circulating diseases of all of those formerly very common childhood diseases is because of school requirements,” said Dr. Bob England, interim executive director of the Arizona Partnership for Immunization.

Schools report vaccination information to ADHS each year for child care, kindergarten and sixth grade. A student is either immune, which means fully vaccinated, or exempt for a medical or personal reason. Any student without vaccination records or an exemption is prohibited from attending school, according to state law.

While the pandemic caused substantial drops in some vaccination rates, the number of vaccine-exempt students has also increased over the past decade, driven in large part by higher rates of personal belief exemptions. ADHS and Maricopa County piloted a limited education program to reduce those exemptions in schools in 2017, but ADHS scuttled the initiative based on public backlash. The department did not reinstate the program. Instead, ADHS said it relies on promoting “the benefits, safety and effectiveness of childhood vaccinations.”

The U.S. Centers for Disease Control and Prevention recently voted to add COVID-19 vaccination to the recommended schedule for children and adults, but Arizona has moved in the opposite direction. In 2022, the Republican-controlled Arizona Legislature passed a bill barring the COVID-19 vaccine, for any variant, from ever being required for school attendance. Gov. Doug Ducey signed the bill into law.

England, a former director of the Maricopa County Department of Public Health, is concerned about what this may mean for uptake of all vaccinations. “What I'm really, really worried about…,” he said, “is that for the first time, vaccines and vaccine requirements became a partisan issue.”

Vaccination rates across the nation for kindergarten students declined overall by around 1 percentage point during the 2020-2021 school year, according to a recent CDC estimate. A drop of this magnitude equates to tens of thousands of children becoming more vulnerable to vaccine-preventable diseases.

According to Dr. Sean Elliott, a pediatric infectious disease specialist in Tucson and emeritus professor at the University of Arizona, the “precipitous drop has everything to do with the pandemic.” Elliott, a member of the American Academy of Pediatrics, said he does not think anti-vaccine sentiment has contributed as much to the recent extreme decline in Arizona, instead calling it “an underlying trend.”

AZCIR contacted more than two dozen school districts and charter schools to better understand drops in student vaccination rates between the 2018-2019 and 2021-2022 school years. Among the eight districts that responded, six provided interviews or statements and two declined to comment.

For sixth grade students, the rate of the meningococcal and Tdap vaccines decreased the most over the course of the pandemic. Children receive these vaccines at age 11, right around the time they enter sixth grade. About two-thirds of schools analyzed had these vaccination rates decrease from 2018 to 2021.

At Thompson Ranch Elementary in El Mirage, the meningococcal and Tdap vaccine rates for sixth-graders decreased by about 30 percentage points. The school is part of the Dysart Unified School District, where, according to district spokesperson Renee Ryon, much of the student population suffers from a general lack of access to health care, including vaccinations.

Ryon said the school, which has a large share of students from low income families, is aware of the problem and has worked “tirelessly to improve” immunization rates through partnerships with local health providers.

The federally funded Vaccines for Children program allows children who are on Medicaid, uninsured or underinsured to be immunized, but the number of providers in the network has shifted over the years. England said he and his group, the Arizona Partnership for Immunization, are now trying to determine if the number of federally funded Vaccines for Children providers has decreased overall.

At Dr. Daniel Bright School in Yavapai County, MMR immunization rates dropped by 23 percentage points to 63.9%. Bob Clark, the district nurse for the Cottonwood-Oak Creek District, said this is because students also lacked access to routine vaccination in 2020 and 2021.

“We were hearing wait times of two months or more in order to get in and vaccinated,” he said about the time when health care was focused on COVID vaccines and not as much on other well-child care.

Before the pandemic, an increase in vaccine exemptions played a significant role in Arizona’s multiyear, downward trend in immunization rates. A large share of the exemptions are for non-medical reasons, better known as personal belief exemptions, which are permitted by 15 states nationwide.

In Arizona, a parent only needs to sign one form to receive a personal belief exemption for one or all required vaccines. The rate for such exemptions in the state jumped from 3.9% to 6.6% for kindergarten students over the past decade, AZCIR’s analysis showed. For sixth grade students, 7.4% have an exemption from at least one vaccination. 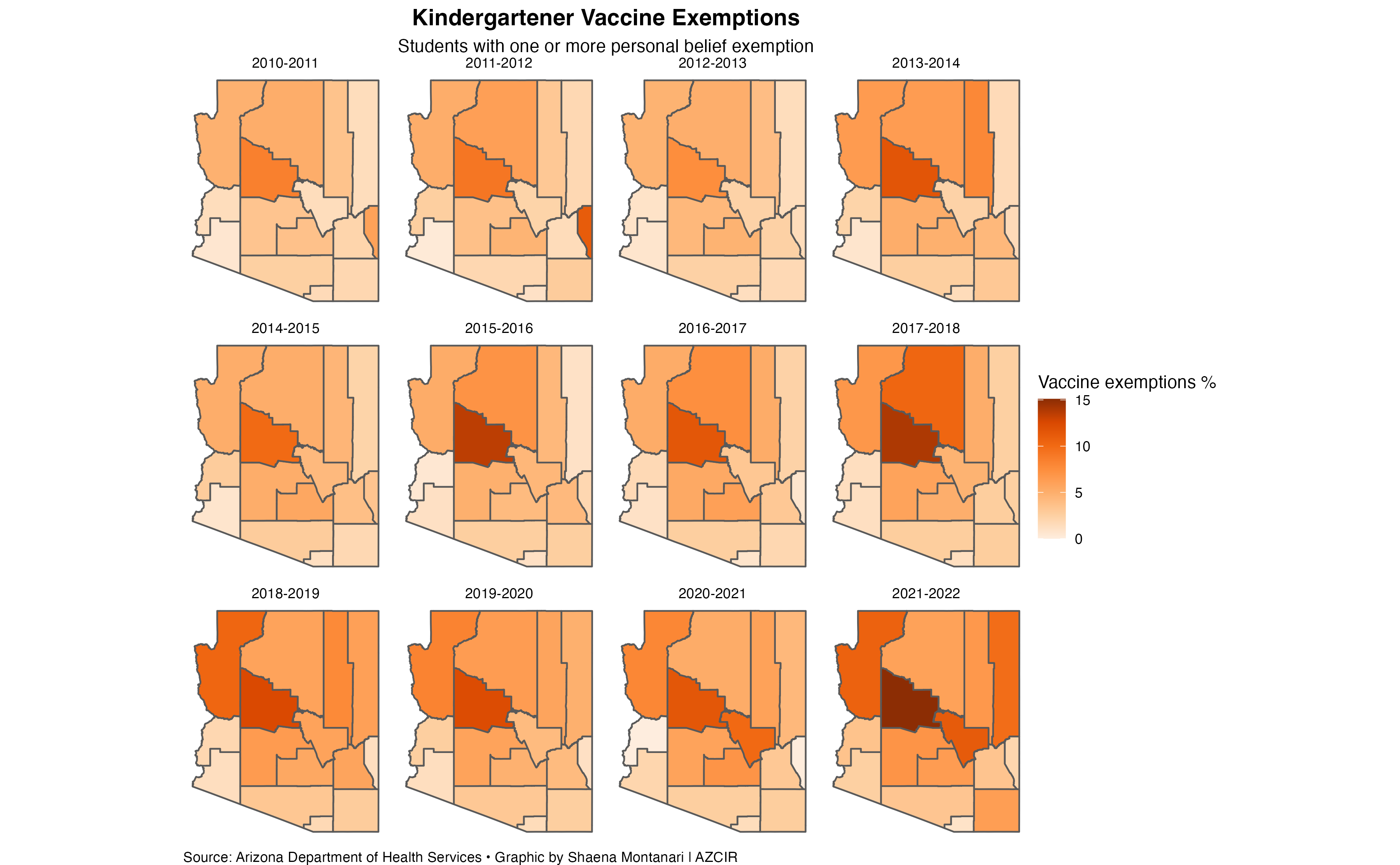 MAP: The percentage of students with personal belief exemptions in Arizona has increased over the past 12 years. In 2010, the statewide average of kindergarten students with at least one exemption was 3.2%. It has since grown to 6.6%. In Yavapai County, 15.1% of kindergarten students had one or more personal belief exemptions in 2021, which is the highest in the state.

The American Academy of Pediatrics, which advocates for the elimination of personal belief exemptions, views them as “inappropriate for individual, public health, and ethical reasons.”

In Cottonwood-Oak Creek, for example, Clark said only a small percentage of students with exemptions in his district have received no vaccines at all. He said students have fallen behind on vaccinations but cannot go to school until they are either immunized or exempt, so they sign an exemption form instead.

That tactic could explain why a decade-old study commissioned by the ADHS found that schools likely have an inflated rate of personal belief exemptions, or what the report called “record keeping challenges.”

State and county health departments attempted to reduce the number of personal belief exemptions through a course that provided access to educational materials before parents sign an exemption form. But after a 2017 pilot at 16 schools in Maricopa County, the state canceled the program. The video-based education course, which is still available on the ADHS website, was meant to expand across the state in an extended pilot in 2019.

As originally reported by The Arizona Republic, about 120 individuals and families complained about the program, thinking it would become mandatory. It was canceled in August 2018 and  “wasn’t reinstituted due to the pilot results and stakeholder feedback,” according to Tom Herrmann, ADHS spokesperson.

But an AZCIR review of the pilot results, obtained through records requests, reveals that it was difficult to draw conclusions from the program based on how the study was designed. There were not enough schools in the study to determine if the program reduced exemption rates, according to information from Sonia Singh, spokesperson for the Maricopa County Department of Public Health. While participants in the module took a pre-course survey, they weren’t required to take a post-course survey—and not enough did it voluntarily, meaning what or how much participants might have learned about vaccines remains unclear.

“In recent years, ADHS and many other health departments have moved away from campaigns that can be perceived as trying to scare or intimidate the public,” ADHS spokesman Steve Elliott wrote in an emailed statement. “Feedback from those whom the campaigns attempt to persuade is that such approaches stigmatize and, in doing so, tend to harden positions.”

AZCIR analyzed school-level immunization data from the Arizona Department of Health Services to compare how vaccination rates changed from before the pandemic to the most recent school year.

ADHS said it is working with partners such as the Arizona Partnership for Immunization to conduct outreach about the importance of vaccines.

This spring, the Republican-controlled Arizona Legislature voted along party lines on a bill to reduce the power of the health department, making it unable to require vaccinations for COVID-19 or the human papillomavirus vaccine for school attendance. The legislation was opposed by the Arizona Education Association, the Arizona Partnership for Immunization, the Arizona Public Health Association and the Arizona chapter of the American Academy of Pediatrics.

Experts such as England remain concerned about the trend of vaccination rates, indicating these discussions about required school vaccinations could be a harbinger of problems to come.

“There has never been a public health problem that has been solved through education and voluntary behavior change,” he said. “It's always something in the environment we've done around people, or something in policies and systems that we've created. And for vaccine-preventable diseases, it was school requirements.”

This article first appeared on Arizona Center for Investigative Reporting and is republished here under a Creative Commons license.