Arizona will become the first and only state to impose a one-year lifetime limit for impoverished households receiving federal benefits from the Temporary Assistance to Needy Families program – a move that will cut payments to about 1,600 families next July.

“I think what we have in Arizona is an aggressive and intentional effort to undermine support for vulnerable families,” said Cynthia Zwick, executive director for the Arizona Community Action Association. “Well, I’m worried that many of those families will end up on the streets, they will become homeless. They will not have the resources they need for their children, that their children will be placed in unsafe circumstances.”

The program, known as TANF, is supposed to help to parents as they look for jobs and provide a temporary financial safety net when they cannot work.

A spokesperson for the Arizona Department of of Economic Security declined to be interviewed, but in an email said the state expects to save $325,000 per month and $3.9 million per year. Cronkite News also made three requests for comment from Arizona Gov. Doug Ducey, but did not receive a response.

The average family on TANF receives $195 each month. Part of the savings from the program will instead go to Arizona’s Department of Child Safety to help with abuse and neglect investigations and foster care.

It’s not the first time that the state has cut back on TANF assistance. In 2010, Arizona reduced its limit to three years and in 2011, it went down to two years. Federal law permits 60 months. According to DES, about half of Arizona’s current recipients, will lose benefits come July.

“It seems clear that Arizona has abandoned these two original functions and instead chosen to funnel TANF funds into an overburdened and underfunded child welfare system that has been plagued over the years by both structural and operational failures,” says a recent report from Arizona State University’s Morrison Institute.

“So over the years the state has reduced the amount a family can receive and it also reduced the lifetime limit,” Thom Reilly, director of the Morrison Institute, told Cronkite News.

According to a report by the Center for Budget and Policy Priorities, a national research institute based in Washington, D.C., Arizona — along with Arkansas, Georgia, Idaho, Indiana, Louisiana, North Carolina, Oklahoma, Texas, and Wyoming — is among the poorest performing states in providing TANF assistance to families. For every 100 families in need, just 10 percent get help in Arizona. 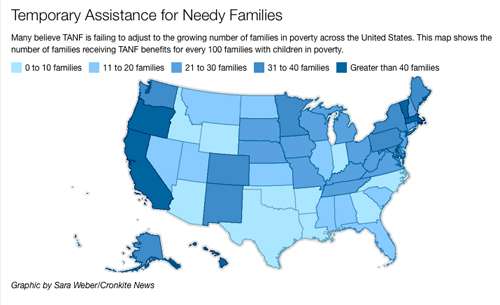 To receive TANF benefits, a family must have dependent children, parents must be enrolled in a jobs program and make sure their children are in school and immunized.

“Arizona has steadily decreased both federal and state funds targeted towards moving families from welfare to the workforce through job training, child care and cash/work- related assistance,” the Morrison report says. “This reduction has been motivated by the need to instead plug state budget gaps and to fund child protection, foster care and adoption services.”

Because these competing demands are interrelated, the report says, "(W)hat on the surface may seem to be a solution for the state’s underfunded and underperforming child welfare
system ... may very well be exacerbating Arizona’s child welfare problem."

Yesenia Luevno, who has four children, said she’s nervous about how she will make up for the lost money.

“It helps out good with the bills and everything.”

“I don’t think for some of the families … that is enough time for them to deal with the issues that they are facing,” said Karen McLaughlin of the Children’s Action Alliance in Arizona. “Some families can come in and be on it for a couple of months and be able to get a job and be off of it very quickly but there are other families that face multiple issues ... if they are homeless, if they are victims of domestic violence, if they have children that have disabilities or other issues or they themselves have disabilities.”

Zwick, of the Community Action Association, added, “One thing I know about these families is that they are resilient and they will work as hard as they can to make ends meet in the meantime… but it’s going to be a struggle.”