But whether that total ban or a 15-week restriction take effect, doctors say Arizona women will face long-term harm

Abortion access in Arizona is set to be drastically restricted this week — possibly even banned outright — and providers warn the outcome will be long-term harm for women across the Grand Canyon State.

A Pima County judge is expected to issue her ruling in a case brought by Attorney General Mark Brnovich seeking to reinstate a 158-year-old abortion ban. It was previously blocked in 1973, after the constitutional right to abortion was recognized in Roe v. Wade.

Since that right was overturned in June, the state now has the final say. Muddying the legal landscape are more recent abortion laws that conflict with the ban, one of which goes into effect on Saturday and prohibits abortions past 15 weeks, including for pregnancies from rape or incest.

Gov. Doug Ducey says that law he signed in the spring should take precedence over the Civil War-era statue, but the architects of the new law say it was only ever designed to apply if the U.S. Supreme Court failed to overturn Roe. Since the court reversed its precedent, the Center for Arizona Policy and other abortion foes say the near-total ban should go into effect.

Dr. Gabrielle Goodrick, an abortion provider in Phoenix, argues that both laws intrude on the patient-doctor relationship and put women facing difficult pregnancies at greater risk.

“The health of women and maternal health depends on having a full range of reproductive choices,” she told the Arizona Mirror.

Prohibiting abortion means eliminating a treatment option. That leaves women experiencing potentially adverse pregnancy conditions, like sepsis or preeclampsia — both of which can be fatal — in danger.

While both the 1864 wholesale ban and the newly passed 15-week ban include an exception for procedures which save the mother’s life, Goodrick worries the scrutiny put on doctors to prove the abortion was warranted will dissuade many from even considering it. Texas doctors have reported delaying the treatment of pregnancy complications out of fear of lawsuits, after an abortion ban with a similarly narrow exception was passed last year.

The 1864 ban, which was passed a year after Arizona became a U.S. territory, carries with it a mandatory prison sentence of 2 to 5 years for doctors; the 15-week ban includes a class 6 felony and revoked license for doctors who violate it.

The end result of bans that tie the hands of physicians, Goodrick said, are worse maternal mortality rates.

“These laws kill women,” she said.

Demand is steady, women will be forced to travel

Outlawing abortion doesn’t make the demand for the procedure disappear. Since 2011, procedures in Arizona have hovered closely around 13,000 resident abortions per year.

Instead, women will be forced out of the state to access a relatively easy procedure, said Dr. Jill Gibson, medical director for Planned Parenthood Arizona. The organization is Arizona’s largest provider, overseeing 4 of the 9 health clinics statewide that offer abortion services. 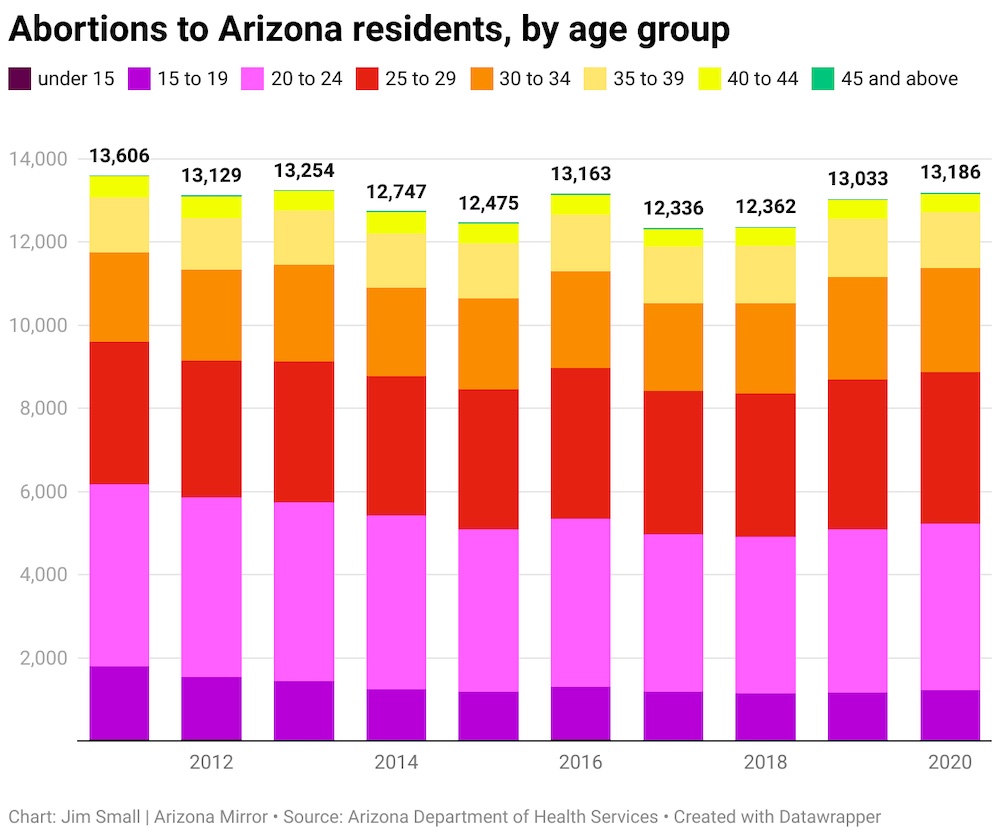 “We’ve taken care that is so straightforward and safe and simple, and it’s had to become so fractured and fragmented because people are being forced to leave their communities and travel for very basic healthcare,” she said.

The average surgical abortion, Gibson said, takes about five minutes to complete.The closest out-of-state provider, by contrast, is in El Centro, Calif., a nearly four-hour drive from the Phoenix area. The California clinic has already seen an uptick in visits from Arizonans, while local clinics paused services just after the protections of Roe v. Wade were struck down.

The often cost-prohibitive nature of missing work to travel out of state will only serve to exacerbate inequalities, disproportionately affecting rural, minority and low-income women, Gibson said. In 2020, 40% of women who obtained an abortion in Arizona identified as Hispanic or Latina, and 12% identified as Black.

Arizona ranks in the top five worst states for critical healthcare worker shortages. Abortion, a key part of family and reproductive health care, threatens to deepen the rift by convincing doctors and students to leave the state. Planned Parenthood Arizona has already lost a staff physician to New York, in anticipation of abortion restrictions that would hinder his work, Gibson said. And Goodrick’s clinic, Camelback Family Planning, is unable to take on more appointments, despite increased interest ahead of the injunction ruling this week, because of understaffing.

“It’s really hard to hire people when abortion might be illegal,” said Goodrick.

Gibson said she worries about the effect abortion restrictions will have on the quality of education for would-be doctors in Arizona. Not only will potential talent be missed out on when students elect to move to other states where they can receive a complete education, but hospitals won’t be staffed with adequately knowledgeable physicians, putting patients with medical emergencies in danger.

“The provision of abortion services is essential to basic reproductive healthcare. As an obstetrician gynecologist, it’s essential to your training,” she said.

Will the bans be 'temporary'? Only if Democrats win the legislature

Goodrick is confident that Arizonans will show up in the polls to make their disapproval known and begin the work of dismantling GOP-enacted bans.

“I think whatever bans we have will be temporary until the state turns blue,” she said.

A ballot initiative to refer the abortion issue to voters and enshrine it as a constitutional right at the state level failed to garner enough signatures to make it onto the ballot this year, but organizers have set their sights on 2024.

In the meantime, efforts to repeal the 15-week ban passed earlier this year will be dependent on Democrats taking the majority in the state legislature. The Republican Party has held a majority in both legislative chambers all but six years since 1966, and has controlled both the legislature and the governor’s office since 2009.

The candidates for governor have drastically different positions on abortion. Democrat Katie Hobbs has called the near total territorial-era ban “draconian”, and vowed to use her veto power to strike down future abortion restrictions if elected, while Republican Kari Lake has called abortion the “execution” of babies and said she would enforce the territorial ban if it was implemented.

This report was first published by the Arizona Mirror.