Southern Arizona may appear as nothing more than a dry haven for saguaro cacti and mesquite trees at first glance, but it includes a region internationally known for its biodiversity — the Madrean Sky Islands. These tall mountains that dot the landscape are threatened by climate change and at risk of losing some of the characteristics that foster such a wide variety of plants and animals.

Drought and fires are expected to permanently alter the ecosystems of the sky islands, with pine forests in the upper reaches at risk of disappearing and water sources such as natural springs and winter snows stressed.

The "islands" elevated above the desert valleys are becoming increasingly hot and dry, said Emily Burns, the program director at the Sky Island Alliance, a group focused on conservation in the area. This is putting the forests at the top of the mountains at risk, she said.

“The ecosystems that depend on the most water and the most cold overnight or winter temperatures, we are at risk of losing those,” Burns said.

The sky islands are a series of 55 mountain peaks that span from Arizona and New Mexico into Mexico. The mountains are each a “habitat island — such as a forest surrounded by desert,” according to the Sky Island Alliance.

The peaks range from desert scrub and grasslands at their lower elevations to ecosystems with pine trees and fir near the top. The Rincon Mountains, Catalinas and Santa Ritas are part of this group.

The mountains are an “amazing crossroad” for animals from the northern United States such as black bears and tropical species such as jaguars and ocelots, Burns said, who credits the biodiversity of the islands to their structure.

“It’s kind of like an apartment building, with so many different types of people (who) can live in an apartment building because there's lots of space vertically,” she said. There are roughly 1,300 species of bees found in the region, more than anywhere else in the world, Burns told the Tucson Sentinel. 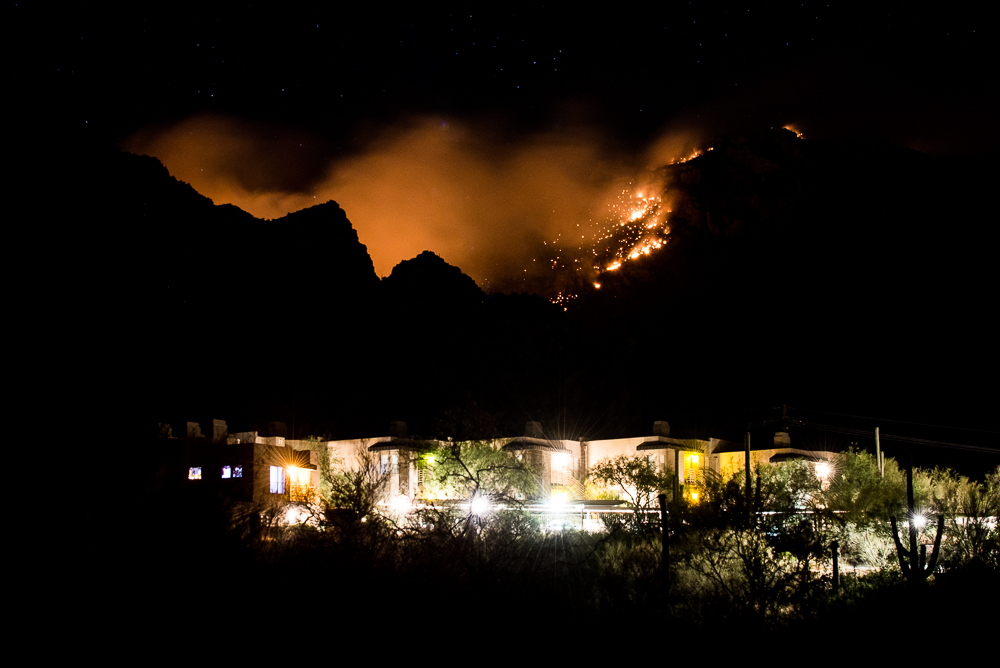 Climate change has led to extreme fires in the area, Burns said, such as the Bighorn Fire on the Catalina Mountains in 2020, which burned nearly 120,000 acres. Drier vegetation combined with less water is making parts of the Sky Islands a “tinderbox,” she said.

Traditionally the Catalina Mountains saw frequent fires every 10 to 20 years among the lower trees and other vegetation, but the fires are becoming more severe due to climate change and past fire suppression, said Laura Marshall, a postdoctoral researcher on seedling fire survival at Colorado State University.

The Catalinas became a victim of the fire suppression push in the 20th century, Marshall told the Sentinel, meaning natural burns were limited, leading to dense forests today.

“And that causes problems when climate change becomes an issue because all those trees are going to suffer from drought, a lot more than they would in a more open stand,” she said.

Instead of burning out smaller plants, and allowing fire-dependent species such as pines to grow, larger fires now reach the crown of the tallest trees and can burn everything in certain areas.

“So even if we can avoid severe fire burning all the mature trees directly, you still might not get the forest reproducing seedlings if it's too hot and dry too often, which is what's predicted for the future,”she said.

The forests sprouting in places like the Catalinas may become dominant with oak trees if fires wipe out the Ponderosa pine, Marshall said. Remaining pines would likely be around springs and cooler areas, she told the Sentinel. 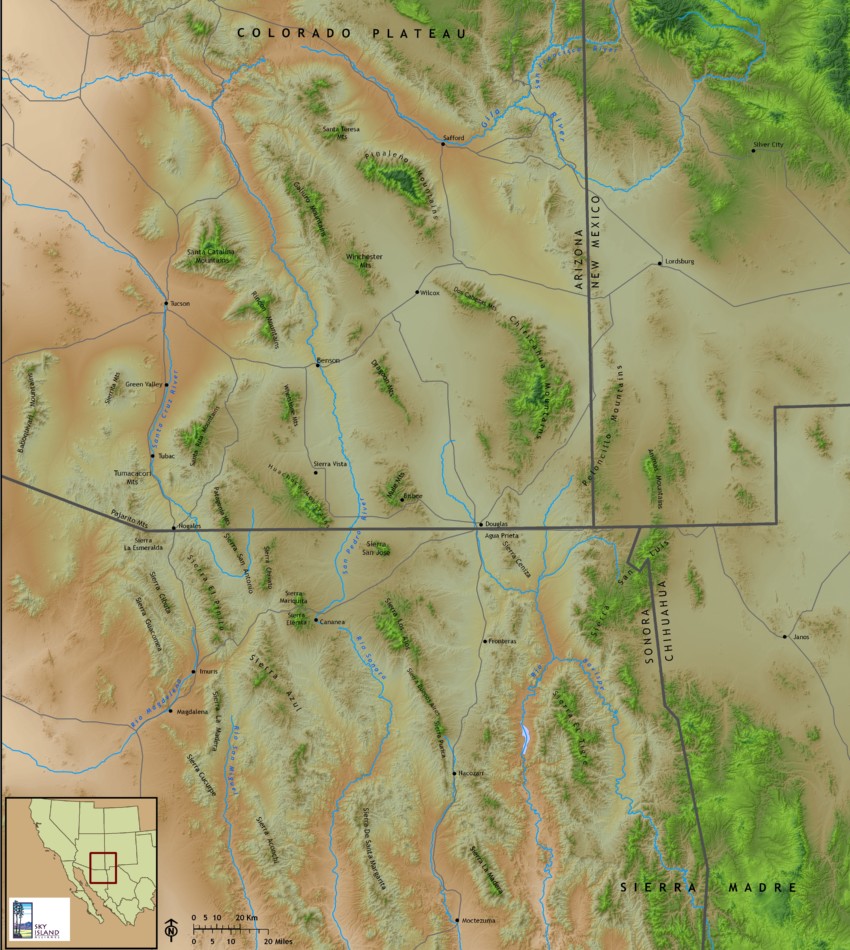 The Rincon’s pine forests are also in danger. Some scientists believe the Ponderosa pine forests in the range east of Tucson may be lost in mere decades due to drought affecting the species’ regeneration, Marshall said.

The loss of pines would in turn affect biodiversity in the ecosystem such as birds who nest in the old-growth trees, she said, in addition to animals like deer possibly being preyed on more. Years like 2020 will likely be “very typical” as climate change continues with more drought and fires, Marshall said.

Multiple species, including migratory birds, have still not completely recovered from 2020’s lack of precipitation, Burns said. The year was the driest on record for Tucson with only 4.17 inches of precipitation and a record 108 days of temperatures surpassing 100 degrees, according to the National Weather Service.

“So if we’re going to have more of these droughts, how many droughts can we have before we fully lose species? Burns asked. “And I don’t think any of us know the answer to that.”

Springs of the Sky Islands

The few natural springs in the area support species that do not live anywhere else, said Larry Stevens, the director of the Springs Stewardship Institute. One of these species is the Chiricahua Leopard frogs, which lives in wet meadows and spring-fed areas, he said.

The green and black-spotted frog is listed as “threatened” by the U.S. Fish and Wildlife Service. The animal ranges from about two to five inches long and can live up to 18 years, according to the Center for Biological Diversity.

Places like Mt. Lemmon are seeing less snowpack, leading to less water absorbing into the ground and less to feed the upper-elevation springs, Stevens told the Sentinel. Water sources lower down the mountains are also being affected, he said.

The last five years Mount Lemmon’s Ski Valley has averaged about 75 inches of snow, said Nicholas Aldinger, Ski Valley’s operations manager. The 2000s have been “hit or miss” with snowfall, he told the Sentinel. The last major snowstorm was in 1997-1998 when 14 feet fell, he said.

Snowpack is very important for getting water to absorb into the ground, Stevens said. “One thing that is quite shocking to people is to learn that most of the precipitation, more than 90% of the precipitation that comes into Arizona, particularly at lower elevations, just evaporates out,” he said.

The Sky Island Alliance has a three year “erosion control campaign” to help restore springs in the Bighorn fire area and eight “spring rescue projects,” Burns said. One way the group protects the precious springs is by piling rocks up above them, causing soil to gather, while also preventing landslides from interfering with the resource.

Effects of climate change can be mitigated with individual efforts like collecting rainwater, Burns told the Sentinel. Maintaining hope is vital, she said.

“Otherwise if we all feel like there’s nothing that can be done and we give up then it really is game over, but it doesn’t have to be like that,” Burns said.