People on probation for low-level offenses in Pima County can avoid going to jail if they have skipped out on court-required supervision. The “Clear My Warrant'' program allows probationers to settle arrest warrants issued for absconding, without any additional jail time.

The “no-court, no-jail program” promises to quash felony arrest warrants issued for those who've not complied with probation supervision terms. Probationers can call the Adult Probation Department of the Superior Court to settle their warrants and resume supervision.

The program is intended for people who “are on probation for drug or property crimes, who may have absconded because of their substance use issues,” Chief Probation Officer David Sanders said.

When the program started on August 1, Pima County had 1,039 outstanding warrants for probation violations, Sanders said. A few of the warrants date back decades, but most of the people named in them are eligible for the program.

"Clear My Warrant" is meant to serve people with low-level offenses. Anyone convicted of violent crimes, those who have pending felony charges or who are wanted on additional warrants are ineligible for the program. A probationer is also ineligible if an identifiable victim is still at risk of harassment or stalking, county officials said.

Courts sentence convicted criminals to supervised probation in lieu of jail time. But, not showing up for required meetings with probation officers is a felony offense that can lead to a jail sentence.

The Superior Court wants to avoid incarcerating more people and officials believe “the probationer is much more likely to be rehabilitated when they receive services enabling them to live and thrive in the mainstream of public life,” Sanders said.

The warrant resolution program promises to “reduce violence, uphold public safety, save taxpayer dollars, and promote fairness and justice in our community,” while “helping close the probation-to-incarceration pipeline,” according to a press release.

The Superior Court launched the program at the beginning of the month after receiving a grant worth almost $200,000 from the City University of New York Institute for State and Local Governance.

The CUNY program awarded the grant as part of their “Reducing Revocations Challenge,” which aims to help “to support individuals on probation experiencing the effects and challenges of substance use, mental health disorders, unemployment, and homelessness.”

“Revocation” is a term that refers to courts ending probation for violating terms, which results in jail time.

The court is partnering with the National Center for State Courts, a nonprofit based out of Williamsburg, Va., to monitor the warrant-quashing program. More than $91,000 will go to planning, data collection and evaluation for the program.

The Adult Probation Department will use $100,00 from the grant to offer more services for probationers. $54,000 will subsidize drug testing while $15,000 will pay for public transportation to help probationers comply with their supervision though Sun Tran fares are currently free until the end of the year.

Pima County was one of five jurisdictions nationwide awarded grants through “Reducing Revocations,” but it's the only jurisdiction out of the five using their grant to start a warrant resolution program for probation absconders.

All five have been part of "Reducing Revocations" since it started in 2019. The program awards grants to “local court and justice agency leaders” in the jurisdictions to partner with research organizations on in-depth studies of what drives probation violations and possible solutions through policy or practice reforms.

The Urban Institute, a national nonprofit, partnered with Pima County last year to publish a study of local probation violations and resulting incarcerations as part of “Reducing Revocations."

About 67 percent of petitions to revoke probation in Pima County are filed for “purely technical probation violations, including absconding,” according to the July 2021 report by the Urban Institute.

The jurisdictions and programs supported through the CUNY initiative are:

Five other jurisdictions were in the program at its inception in 2019, including Cook County, Ill and Denver, Colo, but have since left though they're still listed on the program's website.

Bennito L. Kelty is TucsonSentinel.com’s IDEA reporter, focusing on Inclusion, Diversity, Equity and Access stories, and a Report for America corps member supported by readers like you.

If you're on probation but may have a warrant out for not fulfilling the terms of your supervision, you may be eligible to take part in Pima County's "no-court, no-jail" program. 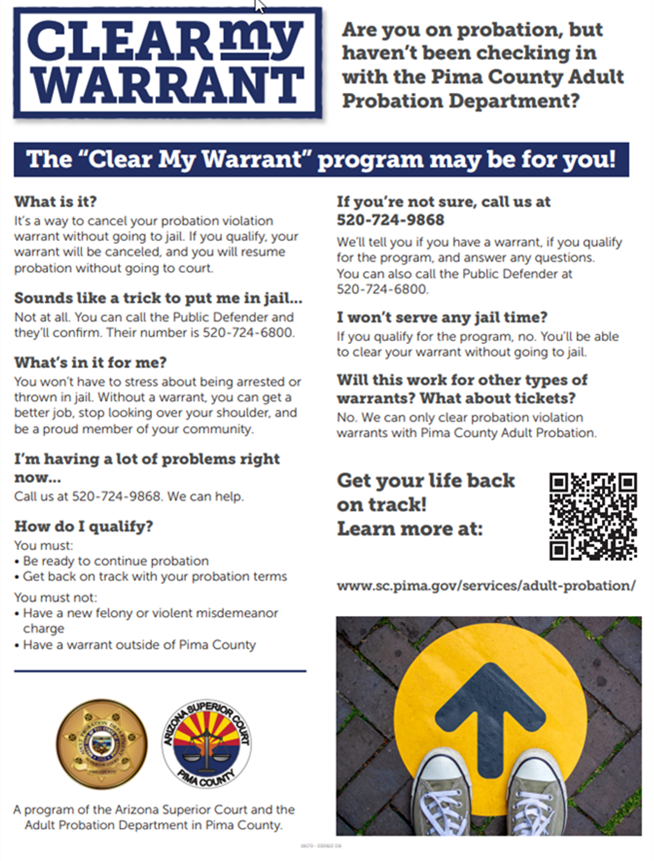 Pima County officials want people to know the program isn't a trick to arrest people with violating their probation.

The Adult Probation Department encourages people to call the Public Defender at 520-724-6800 to verify the program is real.

The Public Defender's office can answer general questions about the program

You're eligible for the program if:

You are NOT eligible for the program if:

If you're on probation but may have a warrant out for not fulfilling the terms of your supervision, you may be eligible to take part in Pima County's "no-court, no-jail" program.

Pima County officials want people to know the program isn't a trick to arrest people with violating their probation.

The Adult Probation Department encourages people to call the Public Defender at 520-724-6800 to verify the program is real.

The Public Defender's office can answer general questions about the program

You're eligible for the program if:

You are NOT eligible for the program if: