The Finger Rock Fire in the Catalina Mountains has burned 750 acres since flaring up Wednesday. Officials are monitoring the blaze, saying that there was little activity Thursday, but that more accurate mapping increased the estimate of the already burned area.

Higher humidity, lighter winds and a few sprinkles of rain Thursday dampened the fire, which "is performing its natural role in the ecosystem."

The small fire in the Santa Catalina Mountains north of Tucson grew from just 5 acres to more than 150 and then burned up canyons and along ridge lines overnight Wednesday, consuming mostly grass and brush, officials said.

Thursday, there was little movement by the fire, with the estimate of the size of the burned area increasing from 500 to 750 acres after officials more accurately mapped the fire's path through the steep, rocky terrain.

The fire had smoldered for a week after being sparked by a lightning strike on July 29. Officials closed a trail nearby, but say the Finger Rock Fire is in a remote location and no structures were threatened.

Authorities were allowing the fire, which had been dampened by rains over the past two weeks, to continue to burn and monitoring the situation, with crews "ready to take action if necessary," they said.

"We may experience another active burning day today, depending on the weather, with decreased activity this afternoon and tonight, through tomorrow," Coronado National Forest officials said Thursday morning. "According to the weather forecast for the fire area, moisture is expected to increase today for better humidity values. General wind will be lighter today with very good humidity recovery tonight. More widespread thunderstorm activity in the area Friday afternoon and evening could result in precipitation on the fire."

"The fire is burning in grass and brush in a steep, arduous terrain in the Pusch Ridge Wilderness. There was very little fire activity until this afternoon, when the fire grew as winds and slope aligned," officials said Wednesday.

The fire, near Pontatoc Canyon, is in inaccessible terrain with rocky bluffs above it. The blaze "is performing its natural role in the ecosystem by removing excess vegetation," said Forest Service spokeswoman Heidi Schewel.

The fire was started by a lightning strike last Wednesday. Earlier this Wednesday, it covered only about five acres and was not showing significant growth, authorities said. As the winds picked up with the sunset, a line of fire reached eastward along a ridge line. 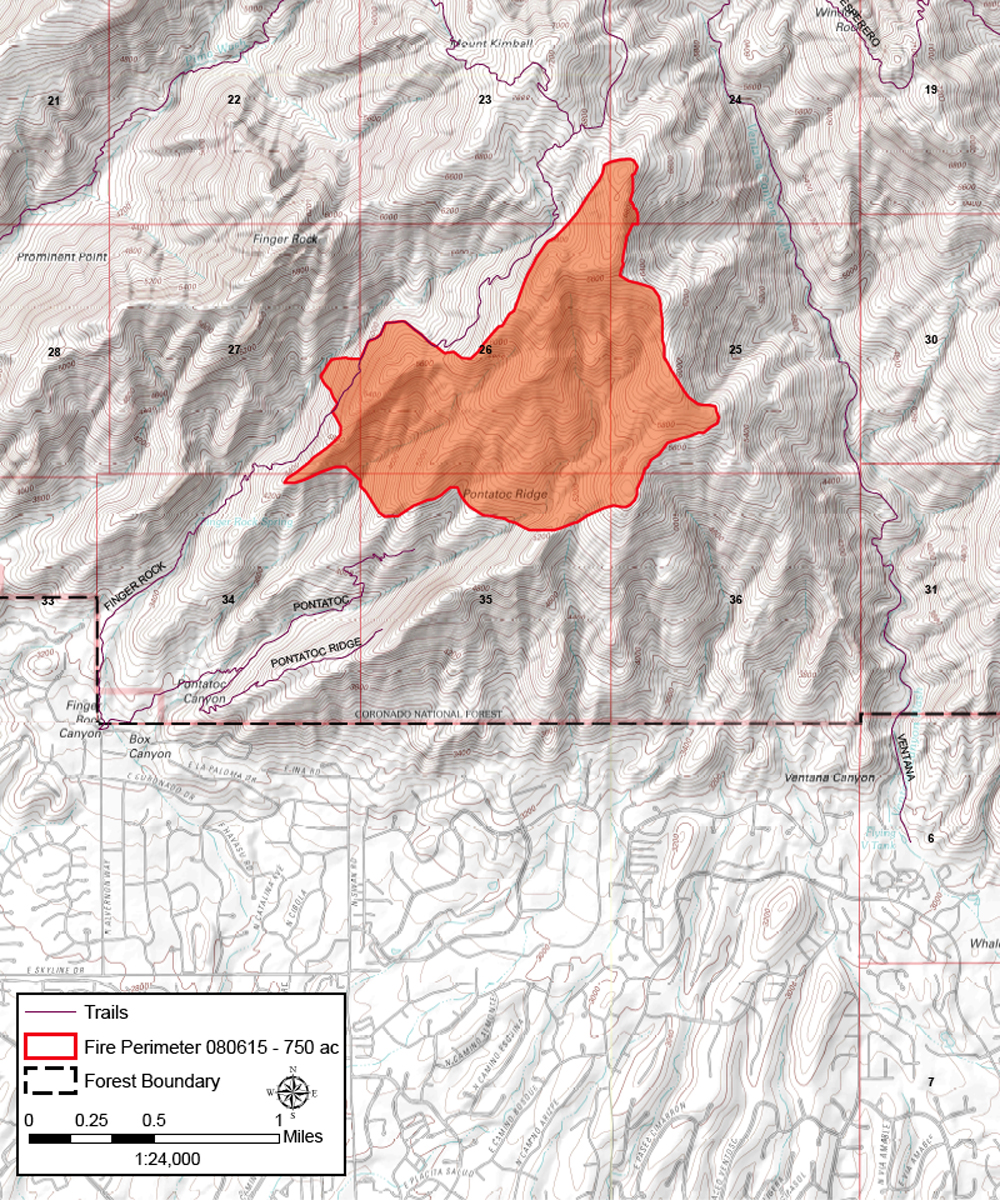