Republican state senator echoed white supremacist rhetoric when she tweeted: 'We are being replaced and invaded.'

A Republican state lawmaker in Arizona posted a tweet over the weekend echoing the racist “great replacement” conspiracy theory, the same idea that has motivated multiple mass murders in recent years.

On Monday, a Jewish organization in Arizona weighed in, calling the language “dangerous” and saying it “has no place in the rhetoric of Arizona's elected officials.”

State Sen. Wendy Rogers has engaged in increasingly extreme rhetoric on social media since winning office in November. She has flaunted her membership in the anti-government Oath Keepers and hyped the notion that there should be mass arrests tied to the 2020 election, which she claims was stolen from President Donald Trump. She was also recently interviewed by a antisemitic outlet whose founder has called Jews “deceivers” and said that the U.S. has been “taken over by a Jewish cabal.”

While many of Rogers’ social media posts revolve around pro-Trump conspiracy theories, she echoed white supremacist rhetoric with a tweet on Saturday: 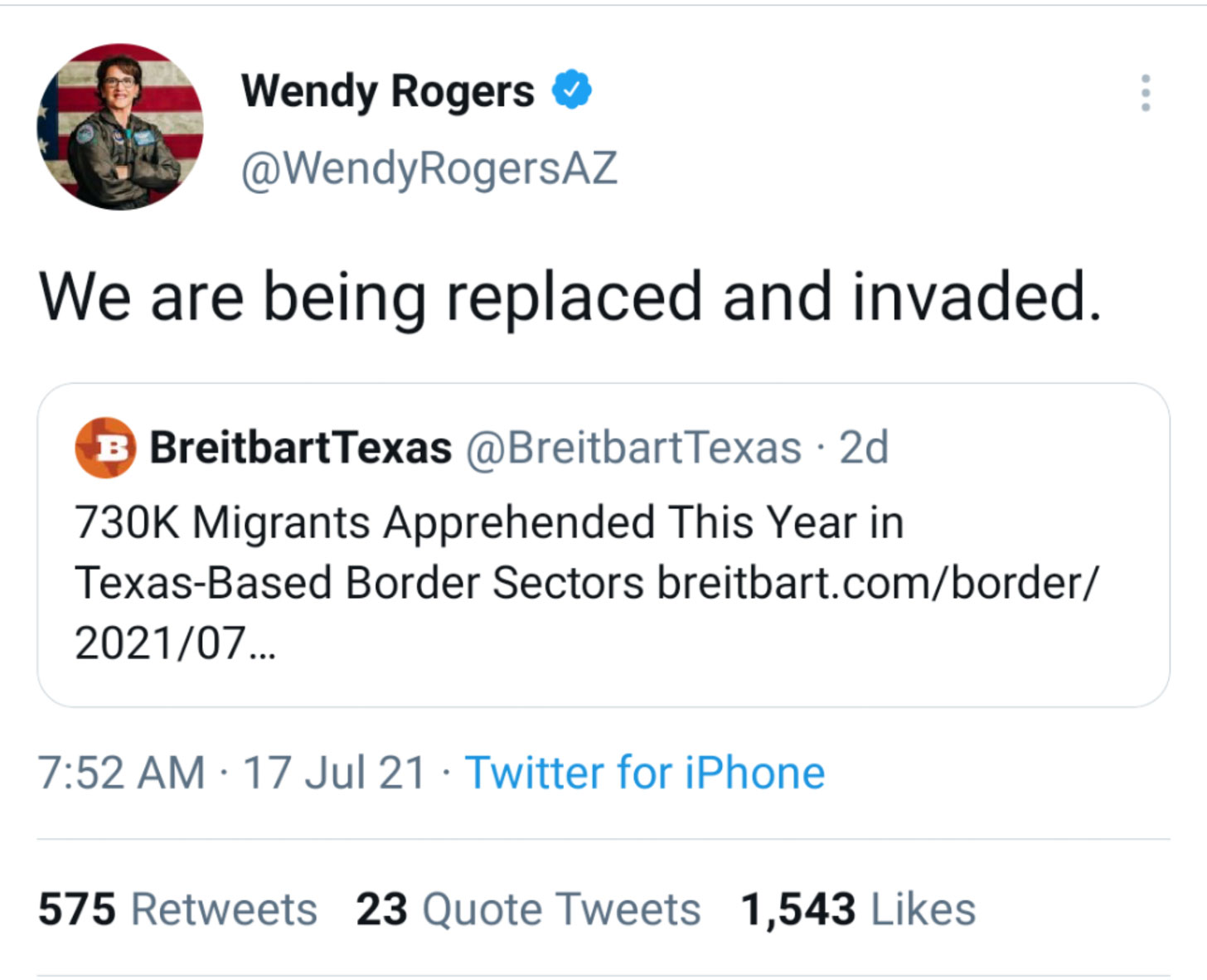 That tweet brought condemnation from a Jewish organization in Rogers’ home state.

Paul Rockower, the executive director of the Jewish Community Relations Council of Greater Phoenix, sent a statement to The Informant on Monday calling out the lawmaker:

The Jewish Community Relations Council of Greater Phoenix is deeply concerned with Sen. Rogers' use of extremist terms that have inspired some of the worst atrocities in recent history. Given the uptick of antisemitism and extremism in our state, and across the country, Rogers' use of thinly-veiled hate speech is dangerous and has no place in the rhetoric of Arizona's elected officials.

The so-called “great replacement” conspiracy theory was popularized by a French writer in a 2011 essay and has gained steam in white supremacist circles around the world in recent years. The theory holds that white people are being systematically replaced by non-white immigrants throughout the world.

The theory has also become synonymous with the racist idea that white people are the subjects of a worldwide genocide. Many white supremacists believe that Jews are behind the supposed replacement.

The theory has motivated multiple killings across the globe over the past few years.

In March 2019, a white supremacist opened fire at a pair of mosques in New Zealand, killing dozens of worshipers and wounding many others. Before the massacre, he posted a manifesto online titled “The Great Replacement” in which he wrote that immigration was an “assault” on white people worldwide.

In August 2019, a gunman killed more than a dozen people, many of them Latino, at a Walmart in El Paso, Texas. Minutes before the shooting, he posted a manifesto online that cited the New Zealand killer and declared: “This attack is a response to the Hispanic invasion of Texas.”

In October 2018, a white supremacist killed multiple people and injured several others at a synagogue in Pittsburgh, Pennsylvania. In a social media post believed to be written by the killer just before the massacre, he complained about a Jewish nonprofit organization that works to resettle refugees in the U.S.

The post said the organization “likes to bring in invaders that kill our people. I can’t sit by and watch my people get slaughtered.”

The Informant sent Rogers an email and private Twitter message on Monday asking her to further explain her tweet. She did not reply to either.

This report was first published by The Informant.