Southern Arizona residents will have more time to comment on the U.S. Air Force's plan to break the sound barrier at lower altitudes, and fly more training missions at night over 10 military aerial training ranges, after officials decided to extend the comment period to June 3.

The shifts would include allowing pilots to push their jets into supersonic speeds at just 5,000 feet above the ground across hundreds of square miles of training areas, which include populated areas across Arizona. Currently, supersonic training flights are only allowed at least 30,000 feet above sea level in the areas that will see changes.

The move could mean more sonic booms that shake the ground and rattle homes.

Because of the difference between a threshold measured from sea level, and one based on the ground level at a site, the new standard could mean fighter jets breaking the sound barrier 10-20,000 feet closer to the ground across large stretches of Arizona.

Air Force officials are also looking to lower the altitude at which pilots can release flares, and allow pilots to drop chaff — metallic clouds of aluminum-coated silica fibers intended to confuse radar — over one area in Southeastern Arizona.

In the Sells, Ruby, Fuzzy, Bagdad and Gladden MOAs, the current limits of 10,000 feet above sea level would remain in place.

In January, the Air Force published a federal notice that it was preparing a draft environmental impact statement for the changes, which included a series of public meetings in towns in Arizona and New Mexico in February. They included events in affected communities in Arizona, including Ajo, Superior, Clifton, and Congress, while two other meetings were held in Animas and Reserve, N.M. to address changes that stretch across the Arizona-New Mexico border.

As part of the process, the Air Force announced a 45-day comment period—called a "formal scooping period" that would last through March 4.

However, the Air Force announced Wednesday that it had extended the comment period through June to "allow additional time for the interested public to review the proposed action and submit scoping comments."

"In response to public and stakeholder input received during the initial scoping period," the Air Force "decided to extend the formal scoping comment period" for the Environmental Impact Statement. The Air Force said that comments submitted from January to March are "currently being reviewed and do not need to be resubmitted."

While the Air Force extended the comment period, it did not add additional public meetings.

Further comments can be submitted through the Air Force's website, arizonaregionalairspaceeis.com/comments, or they can be submitted in writing to the Arizona Regional Airspace EIS, 501 Butler Farm Rd., Suite H, Hampton, VA 23666.

The Air Force said it plans to publish the draft environmental impact statement by fall 2023 and after additional public hearings will publish a final statement by summer 2024.

The new changes, including documents, maps, comment forms are available at arizonaregionalairspaceeis.com. 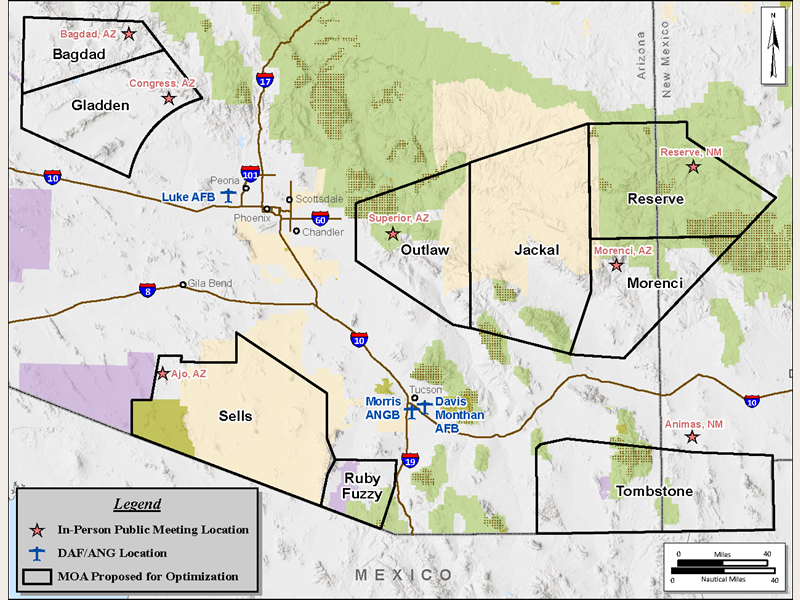 The proposed rule changes would apply to MOAs used by training pilots stationed at Davis-Monthan Air Force Base, Luke Air Force Base, and the 162nd National Guard Fighter Wing based at the Tucson International Airport.

Air Force and other military planes operating below 18,000 feet are allowed to fly at night without lights in the MOAs, which are set up to segregate military training missions from civilian flights.

Along with these MOAs, located west of Tucson is a live-fire bombing range, where the nearly two-million acre Goldwater range is one of the U.S. military's most heavily used, with Air Force planes from D-M and Luke AFB as well as Marine aircraft based in Yuma strafing and bombing as well as practicing aerial maneuvers.

Unlike the Goldwater range, the land beneath the aerial MOAs is not controlled by the military. While they are mostly above rural stretches, the training areas include populated areas.

The training areas were "charted decades ago and have limited capacity to support modern day aircraft and training requirements," the Air Force said, noting that the "capacity for low-altitude and supersonic operations is needed to ensure pilots have the training they need for real-world environments." The Air Force added that because of the limitation created by the MOA in Southern Arizona, "certain aspects of training are either curtailed, delayed, or restructured to occur over several training events."

"This requires more time at a greater cost and results in reduced quality of training," the Air Force said.

The Air Force said that the training in these areas can only be used for "non-hazardous activities" and the rules allow for multiple aircraft to perform maneuvers that would simulate "real-world combat" including the use of supersonic speed, chafe and flares.

The Air Force would update flight rules for training pilots across 10 military training areas in Arizona. This includes the adjacent Sells, Ruby and Fuzzy MOAs, which stretch from Interstate 19 just northwest of Nogales and run west of Ajo, including much of the Tohono O'odham Nation. The changes would also affect Badgad and Gladden training areas northwest of Luke AFB, near Prescott, and the Outlaw, Jackal, Reserve and Morenci flight training areas that begin above Superior, Ariz. and run east past the New Mexico state line.

The Air Force also seeks to change the rules for the Tombstone MOA, which runs east of Tombstone, Ariz., and goes across the New Mexico border, covering that state's boot-heel.

In its preferred alternative, the Air Force seeks to adjust the "published times of use" for all of the affected MOAs, and partly eliminate some temporary "notices to airmen" or NOTAMs, that the Air Force now routinely issues for night training. Instead, the Air Force would seek to expand the time flights can occur in Sells, Ruby, Fuzzy, Bagdad and Gladden MOAs, allowing flights to begin at 6 a.m. and running until midnight on weekdays. Currently, the Air Force flies from 6 a.m. to 7 p.m. in those areas.

In the Outlaw MOA—near Superior—and the adjacent Jackal and the Morenci MOAs, the Air Force would fly training missions until 10 p.m.

In the Reserve MOA, where training flights require NOTAMs, flights could instead occur from 6 a.m. until 10 p.m.

In the Tombstone MOA, flights will remain limited to the 6 a.m. to 9 p.m. window, but will be allowed to fly on weekends as well.

The Air Force will also lower the altitude for supersonic speeds down to 5,000 feet above ground level in the Tombstone, Outlaw, Jackal, Morenci, and Reserve areas, down from 30,000 feet above sea level now.

And, the Tombstone MOA will be extended around 750 square miles.

Among the changes, the Air Force is seeking the add the ability to drop chaff — bundles that contain millions of aluminum-coated silica fibers intended to form an electronic "cloud" that can obscure a fighter from radar — over the Tombstone MOA. The Air Force notes that chaff fibers are approximately "half the thickness of a human hair and are less than an inch long," and said that chaff is "nontoxic and does not pose a health or safety risk."

The Air Force would also seek to drop flares from 2,000 feet above the ground, rather than 5,000 feet. The Air Force said that the flares "burn out completely" within 3 to 5 seconds and fall between 200 to 400 feet, burning out at 1,600 feet above ground level.

"Fire risk associated with flares stems from an unlikely, but possible, scenario of a flare reaching the ground while still burning," the Air Force said. "The minimum release altitude from which flares are dropped is regulated by the airspace manager and based on a number of factors including flare burnout rate and Fire Danger conditions of the area."

The 162nd Wing of the Arizona Air National Guard regularly hosts training pilots from other countries including Iraq, Singapore, Oman and NATO nations, including two who were killed in recent crashes in Arizona. Other deadly crashes have also occurred, both on the Goldwater range and in the Air Force's MOAs.

In 2015, an Iraqi pilot lost control of his F-16, and crashed in grasslands about 5 miles east of Douglas, Ariz. He was killed in the crash.

Less than a year later, in Jan. 2016, an F-16 crashed near Prescott, killing the pilot—a member of the Taiwanese air force flying out of Luke AFB.

Two years, later, in Sept. 2017, a second Iraqi pilot flying out of Tucson lost his life after he crashed near Safford, Ariz.

In 2019, an A-10 pilot accidentally launched a white phosphorous rocket during a training exercise about 60 miles from Tucson. The rocket hit a desert wash in the Jackal MAO, which sits between the Outlaw and Morenci MOAs.

Correction: An earlier version of this story quoted incorrectly implied that the proposed changes would affect all MOAs in Arizona.