The names of the dead were read Friday in Tucson.

For more than 13 hours, volunteers read the names of U.S. service members who were killed in Iraq and Afghanistan in nearly a decade of war.

A pair of readers stood, separated by a white-gloved bell ringer at a table.

A name was read.

Almost 6,800 times, in memory of each member of the U.S. military who died in Operation Iraqi Freedom and Operation Enduring Freedom.

A name was read.

From the shadows of early morning, through the mid-day sun beating down, through the rays of sunset and on into the night, the names of the dead were read.

Included in the list were 52 troops with Southern Arizona ties who died in the Middle East wars.

"When you think about 13 hours of names, just constant reading ... it was deeply moving," said organizer Jerry Haynes.

About 140 people volunteered for 15-minute shifts of reading the names and ringing the bell, said Haynes, a vice president of student development at Pima.

Volunteers ranged from a 14-year-old girl to veterans in their 80s, he said.

"Probably 20 were (Pima) staff, but the rest were volunteers, community people who came in," Haynes said.

"There were so many people who just came in and were involved, and you get to talking with them a bit and hear their stories. This is something that will stick with us for a long time," he said.

"There was a father who had lost his son in the last few months in Afghanistan. He came and wanted to read his son's name, while his daughter rang the bell. That was very difficult to do," Haynes said.

Readers stood at two lecterns, with a bell resting on a table between. Flags flapped in the wind, and banners honoring the dead, placed by Code Pink peace activists, hung around the edge of Pima's courtyard. Each volunteer read about 135 names, Haynes said.

A battle cross honoring the fallen, formed by a pair of boots along with an inverted rifle topped by a helmet, stood in front of a canopy covering white folding chairs. Dog tags dangled from the rifle.

While those gathered at the memorial usually formed a small group, Haynes said hundreds had stopped to listen to the reading throughout the day.

Army veteran Charles Plotkin, 80, spent the entire day at the reading, helping set up not long after sunrise and cleaning up at 8:30 p.m.

"The veterans who passed away since 9/11 deserved to be recognized and memorialized today," he said.

Plotkin arranged to borrow a chrome fire engine bell from United Fire Equipment for the memorial.

"I think this is the least we can do for people who've given their lives," he said.

Plotkin waved off questions about his own service.

"It was stateside," he said with a shrug. "This isn't about me."

"People told me this'll stick with them for the rest of their lives," Plotkin said.

Despite being held outside, with Pima students and staffers walking by, there were many private moments during the memorial.

One man, wearing a reflective vest, briefly stood at attention in front of the battle cross during the afternoon.

"Please don't take my picture. This one's personal," he said. After a few moments, he quietly slipped away. And the litany of names continued.

“When you think about 13 hours of names, just constant reading ... it was deeply moving.” 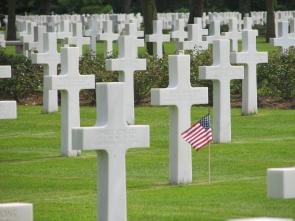 See a tribute to troops with Tucson and Southern Arizona connections who died in the wars in Iraq and Afghanistan: www.TucsonSentinel.com/fallen.

“When you think about 13 hours of names, just constant reading ... it was deeply moving.”

See a tribute to troops with Tucson and Southern Arizona connections who died in the wars in Iraq and Afghanistan: www.TucsonSentinel.com/fallen.